Items related to What We Knew : Terror, Mass Murder and Everyday Life...

What We Knew : Terror, Mass Murder and Everyday Life in Nazi Germany 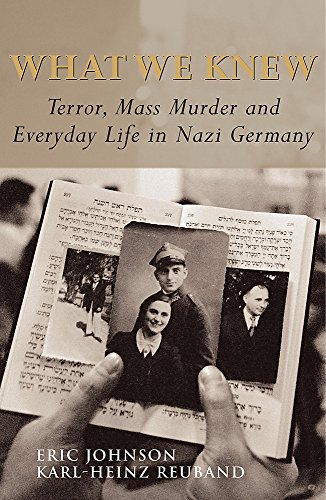 Hundreds of Germans and German Jews have recalled, often for the first time, their experiences of Nazi Germany in horrifying, moving and compellingly honest accounts. Jews have spoken about the harassment and countervailing support of their ordinary German neighbours; of going into hiding, being deported, and harrowing journeys by train to concentration camps. An extraordinary number of ordinary Germans have admitted to knowing about the murder of Jews and, even now, many confess that they admired Hitler and believed in the Nazi movement. It is essential that the reasons for such support are understood and remembered - this groundbreaking research marks a comprehensive shift in Holocaust studies.

Eric Johnson is professor of History at Central Michigan University, a member of the Institute for Advanced Study at Princeton, and a Fellow of The Netherlands Institute for Advanced Study in Humanities and Social Sciences. He is the author of various books, most recently The Nazi Terror: Gestapo, Jews & Ordinary Germans. Karl-Heinz Reuband is professor of Sociology at the University of Dusseldorf and a former visiting scholar at Harvard University's Center for European Studies. He is an expert in opinion research methods.

The refrains in Germany for many years after WWII were "we didn't know" about the Holocaust, and "if we had known and had tried to do something, we too would have been killed by the Nazis." These claims have not stood up to historical scrutiny. Large numbers of ordinary Germans were involved in carrying out the mass murder of Jews, and knowledge of it was widespread among the population at home in Germany. Moreover, the Nazi elite ruled primarily by consensus, not terror; it was a popular dictatorship. Central Michigan University historian Johnson and German sociologist Reuband confirm these interpretations in their wide-ranging study based on hundreds of interviews and surveys they conducted with both Jewish and Christian Germans. Johnson (Nazi Terror) and Reuband don't add much that is new to what we know about the Nazi dictatorship and the Holocaust, but the materials they have gathered are interesting. Roughly two-thirds of the book consists of transcripts of interviews with Jews who had a range of experiences (going into hiding, leaving Germany before Kristallnacht, suffering in the camps) and Germans (those who heard about the murder of Jews, those who didn't, those who participated). The analysis in the book's final third is sober and sobering. But it's the gripping immediacy of the interviews, laced as they are with anger, guilt, sadness and, still among some Christian Germans, pride, that carries the book. (Feb.)
Copyright © Reed Business Information, a division of Reed Elsevier Inc. All rights reserved.

1. What We Knew: Terror, Mass Murder, and Everyday Life in Nazi Germany: An Oral History

2. What We Knew: Terror, Mass Murder and Everyday Life in Nazi Germany

3. What We Knew: Terror, Mass Murder and Everyday Life in Nazi Germany

4. What We Knew: Terror, Mass Murder and Everyday Life in Nazi Germany

5. What We Knew : Terror, Mass Murder and Everyday Life in Nazi Germany

Book Description John Murray (Publishers), 2005. Hardcover. Condition: Very Good. Dust Jacket Condition: Very Good. 1st Edition. First English edition. In this remarkable personal history of the Third Reich, 3,000Germans and 5oo German Jews tell of their everyday experiences of life under the Nazis in the 1930s and 1940s Germany. They describe their brushes with the Gestapo and other organs of terror, and what they knew at the lime about the mass murder of German and other European Jews. What they say is horrifying, moving -- even at this distance from the war -- often surprising .**The book has light tanning while the jacket is a little rippled at the top.**. Seller Inventory # 001701