Items related to The Birth of Theatre: Stage By Stage: Volume 1

Freund, Philip The Birth of Theatre: Stage By Stage: Volume 1

The Birth of Theatre: Stage By Stage: Volume 1 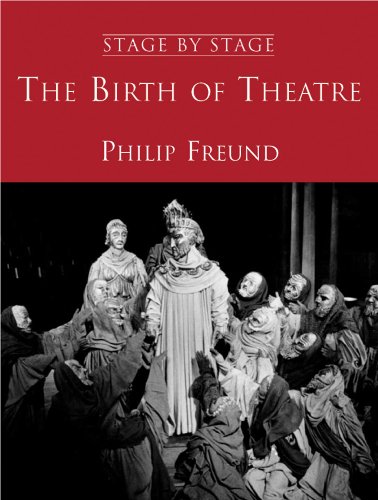 The first volume in the Stage by Stage series, covering the classical theater of Greece and Rome.

Philip Freund has spent more than 30 years writing a monumental history of the theater. The Stage by Stage series is a chronicle of world theater, from primitive rites and enactments of myths to contemporary drama, to be published in a series of volumes. This first one traces the evolution of classical drama from its beginnings in Egyptian and Middle Eastern religious ritual, and particularly the Greek mystical cult of Dionysus, through the golden age of the Periclean period in Athens and ending with the major Roman playwrights of the late Republican and early Imperial age. The book includes detailed discussions of the extant plays—tragedies and comedies—of Aeschylus, Sophocles, and Euripides. This is followed by accounts of notable productions and revivals, especially in the U.S. and Britain over the past half-century as well as earlier where descriptions or assessments are available. The book ends with a discussion of the development of Middle and New Comedy in Greece and the works of Plautus, Terence, and Horace.

Philip Freund is a novelist, poet, documentary film writer, and playwright as well as essayist, literary critic, and anthropologist. He is a professor emeritus at Fordham University, New York, and he has taught and lectured on drama and related subjects at other universities.

Book Description Peter Owen Publishers, United Kingdom, 2004. Hardback. Condition: New. Language: English. Brand new Book. Professor Philip Freund has spent over thirty years writing a monumental history of the theatre. Stage by Stage is a chronicle of world theatre from primitive rites and enactments of myths to contemporary drama. It differs from anything else in the field in that it comprises not only playwrights, but opera and composers, musical comedy, ballet, modern dance, choreographers, circuses, theatre architects, scene designs, puppetry, famous actors and directors - all the aspects of its subject. Stage by Stage is encyclopaediac, but it is not an encyclopaedia. It has a colourful and anecdotal approach to narrative. It tells how the classic dramas were produced then and how they are staged now. The social, economic and political settings of the plays are fully described, and the major dramatists profiled and analysed in considerable detail. The history is consistently objective, expressing not the opinions of the author but the views of hosts of critics and scholars, past and present. An unusual feature of the work is that it surveys many countries and regions not in other general histories.The author has travelled to more than 90 countries, some repeatedly, and has a personal acquaintance with stagings and dances in exciting places. He can, for example, describe Antigone as performed in Alaska by Inuits and in Rhodes by modern Greeks. Stage by Stage is to published in a three volume series. This first volume is an entity: it deals with the classical theatre up to the fall of the Roman Empire. The product of vast learnng, enormous research and above all a passion for theatre, these volumes represent a unique and extraordinary achievement in the literature of the stage. Seller Inventory # ABE9780720611670

Book Description Condition: New. This volume traces the evolution of classical drama from its beginnings in Egyptian and Middle Eastern religious ritual, through the golden age of the Periclean period in Athens, and ending with the major Roman playwrights of the late republican and early imperial age. It includes detailed discussions of the plays of Aeschylus, Sophocles, Euripides, Plautus, Terence and Horace. Seller Inventory # 1996