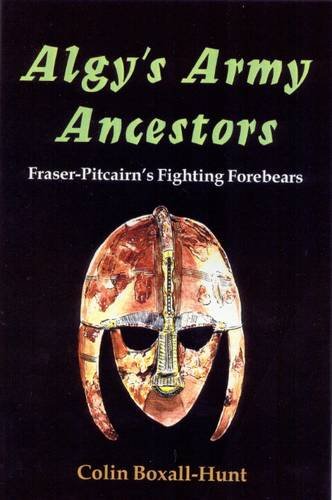 Algernon Fraser-Pitcairn is convinced that he is a reincarnated Anglo-Saxon warrior called Ceawlin. Traumatised by his own experiences of war in Africa and the Middle East, he undergoes hypnotherapy; and in repeated 'dreams' he is swept back 1,000 years through time. As Ceawlin, he finds himself fighting against the Vikings at the Battle of Pinhoe, near Exeter, and he will not rest until Hengist the Dane is dead. Further evidence that Algy's fighting qualities might have been inherited comes in a story told by his grandfather, a grizzled one-legged veteran of the Second Boer War.

After graduating from the Royal Military Academy, Sandhurst, the author was commissioned into the Royal Regiment of Artillery in 1963, and completed a full career as a regular army officer until 1989, serving in the British Army of the Rhine, Oman (where he saw active service against the communist insurgents) and Rhodesia/Zimbabwe. During these years he held a wide variety of posts, both at regimental duty and as a staff officer, including command of 'J' (Sidi Rezegh) Battery, Royal Horse Artillery, an independent battery armed with Swingfire long-range anti-tank missiles launched from tracked armoured vehicles. He was a keen offshore yachtsman, and a highly experienced and qualified underwater diver, being appointed a Joint Service Sub Aqua Diving Supervisor. In 1974 he was awarded HM the Sultan of Oman's Commendation for Merit on Active Service. In 1991 he was recruited by the commanding officer of 4th (TA) Battalion of the Devon and Dorset Regiment (his grandfather's regiment) to command Headquarter Company, based in Exeter, Devon. He held this post until 1993, when a stroke suffered while on duty overseas led to his retirement on disability grounds. He is divorced, and now works as a voluntary welfare caseworker for the Royal British Legion and a fund-raiser for the Army Benevolent Fund ('The Soldiers' Charity'). Other interests include teaching German, in which he is almost bilingual, and writing. His first published novel, Congo Cobalt, was followed by a sequel, Mayhem in Mazoe, and two anthologies of short stories, Seven Short Sailing Stories and Twelve Tense Tales. A further collection of short stories, Warty Wins Again! is his third anthology. All three anthologies are published under his own imprint, Wartybooks publishers, and details can be seen on his website, www.wartybooksvpweb.co.uk. He intends that all these books will be in due course available as ebook downloads from Amazon and others.