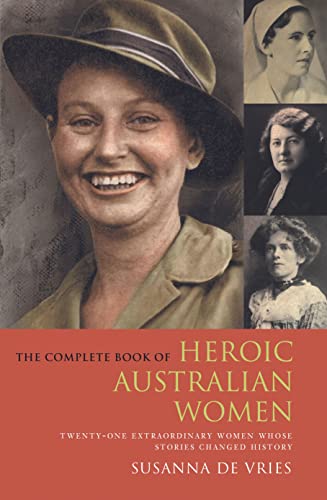 In this inspiring book, Susanna de Vries profiles the love, dedication, and selflessness of eleven outstanding women over the course of two world wars: from Olive Kin, who saved countless lives in the war-ravaged Balkans, although she lost her heart; to Gallipoli nurse Alice Kitchen, who also served in France; to Vivian Bullwinkel, who survived the Bangka Island Massacre only to face more than three years watching her colleagues die as Japanese prisoners of war.

Facing not only the astounding courage they displayed amid death and chaos but also on the triumphs and pain of their personal lives, Susanna reveals how these women were as influential and heroic in civil life as they were in war.

Susanna de Vries is an international author and former lecturer at the Queensland University of Technology. She writes full-time but also lectures to branches of the Australian Fine and Decorative Art Society. She speaks fluent Spanish and French and has lived and worked in London, Edinburgh, Berlin, Florence, Barcelona and Sydney but now lives in Brisbane and has nine grandchildren. Susanna's fourteen books have won her literary awards in Ireland and Britain, an Order of Australia for services to literature and a Winston Churchill Fellowship.

Book Description Paperback. Condition: Very Good. The book has been read, but is in excellent condition. Pages are intact and not marred by notes or highlighting. The spine remains undamaged. Seller Inventory # GOR006957917

Shipping: US$ 6.92
From United Kingdom to U.S.A.
Destination, rates & speeds