Items related to Privilege and Liberty and Other Essays in Political...

Kolnai, Aurel Privilege and Liberty and Other Essays in Political Philosophy (Applications of Political Theory) 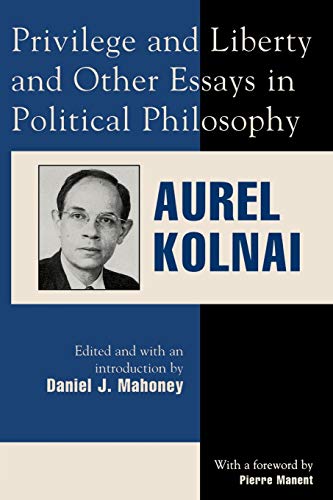 We are currently witnessing an increasingly influential counterrevolution in political theory, evident in the dialectical return to classical political science pioneered most prominently by Leo Strauss and Eric Voegelin. In this context, the work of the relatively unknown Aurel Kolnai is of great importance. Kolnai was one of the greatest thinkers of the twentieth century to place the restoration of common-sense evaluation and philosophical realism at the center of his philosophical and political itinerary. In this volume, Daniel J. Mahoney presents Kolnai's major writings in political philosophy, writings that explore - in ways that are diverse but complementary - Kolnai's critique of progressive or egalitarian democracy. The title essay contains Kolnai's fullest account of the limits of liberty understood as emancipation from traditional, natural, or divine restraints. 'The Utopian Mind,' a pr,cis of Kolnai's critique of utopianism in a posthumous book of the same title, appears here for the first time. 'Conservative and Revolutionary Ethos,' Kolnai's remarkable 1972 essay comparing conservative and revolutionary approaches to political life, appears for the first time in English translation. The volume also includes a critically sympathetic evaluation of Michael Oakeshott's Rationalism in Politics and an incisive criticism of Jacques Maritain's efforts to synthesize Christian orthodoxy and progressive politics. Privilege and Liberty and Other Essays in Political Philosophy is a searching critique of political utopianism, as well as a pathbreaking articulation of conservative constitutionalism as the true support for human liberty properly understood. It is a major contribution to Christian and conservative political reflection in our time.

Aurel Kolnai (1900-1973) was a distinguished moral and political philosopher. His books include The War Against the West (1938), Ethics, Value and Reality (1977), and The Utopian Mind and Other Papers (1995). Daniel J. Mahoney is Associate Professor of Political Science at Assumption College. He is author of The Liberal Political Science of Raymond Aron (1992) and De Gaulle: Statesmanship, Grandeur, and Modern Democracy (1996) and the editor of Modern Liberty and Its Discontents by Pierre Manent (1998).

This volume of Kolnai's essays offers a searching critique of political utopianism and casts a penetrating eye on liberal democracy's own illiberal and potentially self-destructive tendencies. (Perspectives on Political Science)

[This] book . . . gives us a clearer and more familiar insight into a thinker who was not well-known in his time but whose importance may yet prove to be significant. (Rev. James V. Schall S.J., Georgetown University)