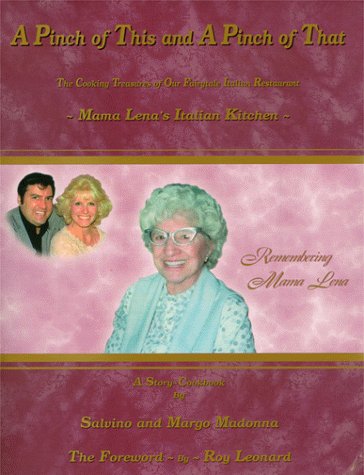 "A Pinch of This and A Pinch of That" The Cooking Treasures of Our Fairytale Italian Restaurant, Mama Lena's Italian Kitchen, is a Story~Cookbook about a very famous Chicago Restaurant, named after Salvino's Mother, Mama Lena. This "very intimate and special spot," known and loved as "Mama Lena's" was opened in 1967, and for 15 years served fabulous food in a full five-course dinner twice nightly in reserved seatings and a unique format. While guests dined, Salvino would entertain them with Songs & Humor. This "Magical Spot" was frequented by hundreds of thousands over those years, and was "the" meeting place for locals and out-of-towners, as well. Many Celebrities and The Press often frequented Mama Lena's and they are highlighted in this Book. Roy Leonard, famed Chicago Radio Personality and respected Entertainment Critic, wrote The Foreword -- And he tells of how he had to wait for a reservation to try The Very Treasured Recipes that are now available in this very wonderful Story~Cookbook.

The Authors, Salvino Madonna and Margo Madonna are Chicago natives, whose families were living 3 miles apart while they were growing up and never knew each other. Then, years later, happily they met at Mama Lena's, fell in love and married. They soon became working partners. Salvino carefully learned his Craft as The Chef of Mama Lena's Italian Kitchen from his Mother, Mama Lena. When Mama Lena retired, Salvino and Margo together operated Mama Lena's with continued love and attention to Guests. In the 80's, Salvino and Margo changed pace into Specialized Catering and served their public in a very different format. For the Last 3 Years, they have dedicated themselves to transferring their Treasured Recipes to Dinner-Size Recipes that Everyone can now experience and enjoy! Salvino and Margo had promised Guests that one day they would write Their Story~Cookbook, and name it, "A Pinch of This and A Pinch of That." Here It Is! Enjoy!

Throughout the 1970s, Mama Lena's tiny Chicago restaurant attracted celebrities and cognoscenti to its twice-nightly dinners. The family-run operation required diners to eat whatever was placed before them, and family members served dinners as well entertained guests. The Sicilian food was so superior to most restaurants' Italian American fare that people crowded the tiny dining room. The current generation of Mama Lena's family has vastly expanded Mama's original pamphlet of recipes and produced a highly personal cookbook that documents the restaurant's noteworthy Sicilian-inspired cooking. As the title notes, this cookbook often calls for seasonings in quantities measured in "pinches." For those demanding more specificity, a table converts pinches to standard measures. This book offers plenty of ideas for party entertaining, since most recipes produce large quantities of food. Accompanying text reveals the family's depth of passion for their matriarch's cooking and their reverence for her memory. Mark Knoblauch

3. A Pinch of This and a Pinch of That: The Cooking Treasures of Our Fairytale Italian Restaurant, Mama Lena's Italian Kitchen [Paperback] Madonna, Salvino and Madonna, Margo