Items related to The Tiger Rising 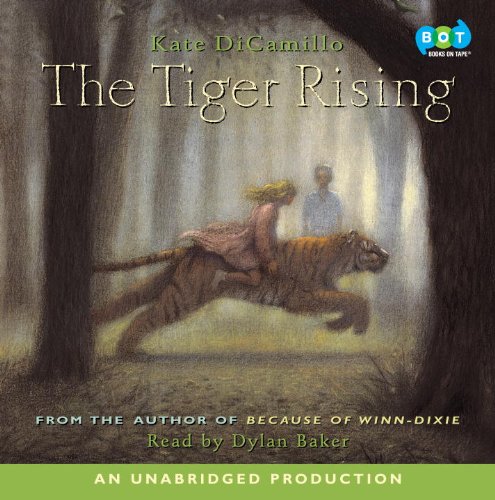 From the best-selling author of Because of Winn-Dixie comes the moving story of an eleven-year-old-boy, Rob Horton, who finds a caged tiger in the woods behind the hotel where he lives with his father. With the help of his new friend, Sistine Bailey, Rob must decide what to do with his discovery and at the same time come to terms with his past.

Kate DiCamillo's first novel Because of Winn-Dixie won a Newbery Honor in 2000 for the no-nonsense charm and wisdom of its down-home young heroine, Opal. Also set in Florida, The Tiger Rising is more of a short story in scope, the tale of 12-year-old Rob Horton who finds a caged tiger in the woods behind the Kentucky Star Motel where he lives with his dad. The tiger is so incongruous in this setting, Rob views the apparition as some sort of magic trick. Indeed, the tiger triggers all sorts of magic in Rob's life--for one thing, it takes his mind off his recently deceased mother and the itchy red blisters on his legs that the wise motel housekeeper, Willie May, says is a manifestation of the sadness that Rob keeps "down low."

Something else for Rob to think about is Sistine (as in the chapel), a new city girl with fierce black eyes who challenges him to be honest with her and himself. Spurred by the tiger, events collide to break Rob out of his silent introspection, to form a new friendship with Sistine, a new understanding with his father, and most important, to lighten his heart. This novel is about cages--the consequences of escape as well as imprisonment. The story and symbolism are clear as a bell, and the emotions ring true. (Ages 9 and older) --Karin Snelson

Walking through the misty Florida woods one morning, twelve-year-old Rob Horton is stunned to find a tiger -- a real-life, very large tiger -- locked in a cage. What's more, on the same extraordinary day, he meets Sistine Bailey, a girl who shows her feelings as readily as Rob hides his. As they learn to trust each other and, ultimately, to be friends, Rob and Sistine prove that some things -- like memories, and heartache, and tigers -- can't be locked up forever.