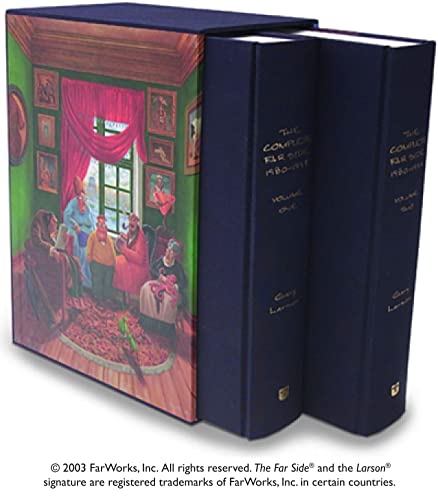 New York Times best-seller!
"Every one of these cartoons is just something that drifted into my head when I was alone with my thoughts. And, for better or worse, I 'jotted' them down. It was only later, when perhaps I received an angry letter from someone, that it struck me: Hey! Someone's been reading my diary!" --Gary Larson, from the preface to The Complete Far Side
Revered by its fans as the funniest, most original, most "What the ... ?"-inspiring cartoon ever, The Far Side debuted in January 1980 and enjoyed an illustrious 14 years on the world's comics pages until Gary Larson's retirement in 1994. The Complete Far Side celebrates Gary's twisted, irreverent genius in this ultimate Far Side book, a lavish production which takes its place alongside collector's-edition art books.

A masterpiece of comic brilliance, The Complete Far Side contains every Far Side cartoon ever syndicated-over 4,000 if you must know-presented in (more or less) chronological order by year of publication, with more than 1,100 that have never before appeared in a book. Also included are additional Far Side cartoons Larson created after his retirement: 13 that appeared in the last Far Side book, Last Chapter and Worse, and six cartoons that periodically ran as a special feature in the New York Times Science Times section as The Far Side of Science. Creator Gary Larson offers a rare glimpse into the mind of The Far Side in quirky and thoughtful introductions to each of the 14 chapters. Complaint letters, fan letters, and queries from puzzled readers appear alongside some of the more provocative or elusive panels. Actor, author, and comedian Steve Martin offers his pithy thoughts in a foreword, and Gary Larson's former editor describes what it was like to be "the guy who could explain every Far Side cartoon."

During its 14-year run, The Far Side was syndicated internationally to over 1,900 daily newspapers. It spawned 22 books and has been translated into a total of 17 different languages.

Gary Larson calls The Complete Far Side, the massive two-volume collection of his Far Side cartoons, an "18-pound hernia giver." Sure to give any coffee table a solid workout, the handsome and heavy 1,272-page "legacy book" is a must for fervent fans; over 4,300 single-panel comics with more than half in color and 1,100 that have not appeared in any book form before (the popular--and far less weighty--paperback collections).

Set in rough chronological order, the comics share pages with occasional letters from fans, detractors, editors, folks made famous by a particular cartoon, and those begging for explanations. Though few explanations are provided (Larson personally supplies merely one, plus a single apology), this collection helps answer the inevitable "how do you think up these things" conundrum. Before each year's cartoons, Larson provides insight with essays about his childhood, various travels, occupational hazards, and his official rules for dealing with bedtime monsters (which often turned out to be his older brother). Most wonderful is the first essay on how the comic started. (His longtime editor Jake Morrissey's long introduction is a must read on The Far Side's story).

Despite no central characters, it's easy to spot patterns in Larson's wild and wacky cartoons. Animals, insects, and inanimate objects often exhibit all-too-human impulses. Larson's subjects are often in scenes of peril--disasters, visits to hell, and perhaps a hundred cartoons set on a one-palm tree deserted island. It is what Larson's fertile imagination mined from those situations that created fans and enemies for 14 years. (Larson retired at his peak and then went into jazz music). The comics are not indexed (how could they be--first lines? listings of cartoons with cows?); finding a favorite requires a great memory for its publication date. Best simply to peruse the pages of this beautiful collection in which you will certainly find more than a few new chuckles before landing on your beloved Larson sketch. --Doug Thomas

The Far Side was syndicated in more than 1,900 daily newspapers from 1980 to 1995, when Gary Larson retired. During its run, the cartoon spawned 22 books from AMP, which were translated into a total of 17 different languages. For his work with The Far Side, Larson was awarded the Reuben Award for Outstanding Cartoonist from the National Cartoonists Society in 1991 and 1994. The group also named The Far Side Best Syndicated Panel in both 1985 and 1987.

Shipping: US$ 31.26
From United Kingdom to U.S.A.
Destination, rates & speeds

Shipping: US$ 18.74
From United Kingdom to U.S.A.
Destination, rates & speeds

Shipping: US$ 25.01
From United Kingdom to U.S.A.
Destination, rates & speeds

The Complete Far Side (Hardcover)

Shipping: US$ 56.27
From United Kingdom to U.S.A.
Destination, rates & speeds