Items related to The Wild Blue: The Men and Boys Who Flew the B-24s... 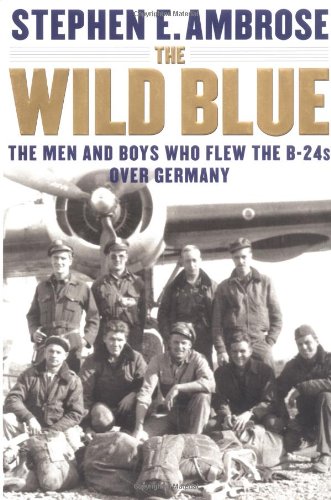 An exciting foray into the lives of the young men - pilots, bombardiers, navigators, and gunners, chosen by the Air Force to embark on the most dangerous missions during World War II details their courage, bravery, and determination. 500,000 first printing.

Long before he entered politics, when he was just in his early 20s, South Dakotan George McGovern flew 35 bomber missions over Nazi-occupied Europe, earning a Distinguished Flying Cross for bravery under fire. Stephen Ambrose, the industrious historian, focuses on McGovern and the young crew of his B-24 bomber, volunteers all, in this vivid study of the air war in Europe.

Manufactured by a consortium of companies that included Ford Motor and Douglas Aircraft, the B-24 bomber, dubbed the Liberator, was designed to drop high explosives on enemy positions well behind the front lines--and especially on the German capital, Berlin. Unheated, drafty, and only lightly armored, the planes were dangerous places to be, and indeed, only 50 percent of their crews survived to the war's end. Dangerous or not, they did their job, delivering thousand- pound bombs to targets deep within Germany and Austria.

In his fast-paced narrative, Ambrose follows many other flyers (including the Tuskegee Airmen, the African American pilots who gave the B-24s essential fighter support on some of their most dangerous missions) as they brave the long odds against them, facing moments of glory and terror alike. "It would be an exaggeration to say that the B-24 won the war for the Allies," Ambrose writes. "But don't ask how they could have won the war without it." --Gregory McNamee

Stephen E. Ambrose is the author of numerous books of history, including the New York Times number one bestseller Nothing Like It in the World, and Undaunted Courage, D-Day, and Citizen Soldiers. He lives in Bay St. Louis, Mississippi, and Helena, Montana. Visit his Web site at www.stephenambrose.com.