Items related to Mind at Light Speed: A New Kind of Intelligence 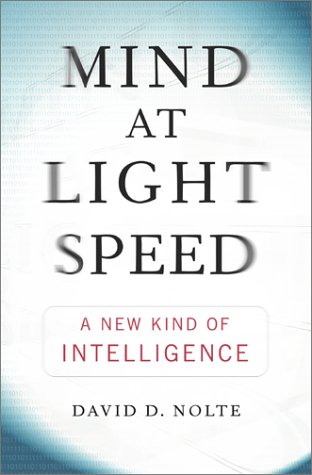 Explains the technology and scientific principles behind the bandwidth revolution and provides an incisive look at the next generation of computers, the future of artificial intelligence, and their implications for human life.

Technology is neat, but the Industrial Revolution didn't really take off until machines starting doing things humans couldn't possibly do. Purdue physicist David Nolte says the same thing will launch the real Information Revolution--when computers start performing functions we can't even understand, much less program. Mind at Light Speed is his outline of the future of computing, including all-optical components "reading" pictures as instruction sets millions of times faster than linear, language-based programs.

This in itself will be a huge advance, giving rise to machines as incomprehensible as our next-door neighbors, and Nolte describes the technology and possible consequences with simple enthusiasm. He also discusses quantum computing at length, proposing an equally mind-boggling leapfrog over optical computing--if it can be made practical. Nolte's insights carry the reader farther into the domain of science fiction than most cyberprophets, but Mind at Light Speed makes a strong case for his world of the future. --Rob Lightner

David D. Nolte is Professor of Physics at Purdue University. He received his Ph.D. from the University of California at Berkeley and is now a leading researcher of the physics of optical materials and devices, with several U.S. patents on adaptive holographic films. He was elected a Fellow of the Optical Society of America for his pioneering work on dynamic holography in semiconductor nanostructures and has won the Presidential Young Investigator Award of the National Science Foundation. He lives in West Lafayette, Indiana.