Items related to Reagan: A Life In Letters

Reagan: A Life In Letters 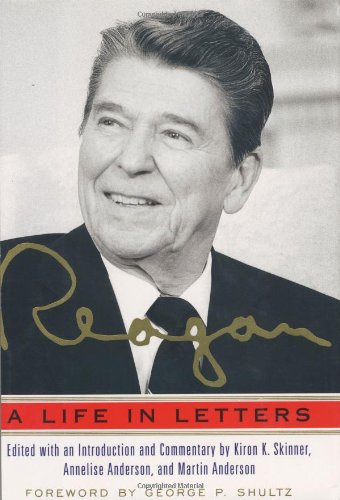 A collection of letters from the former president's extensive correspondence library offers insight into his public and private life of more than seventy years, from his early financial struggles and Hollywood achievements to his political career and personal relationships. 125,000 first printing.

Many books have been written about Ronald Reagan, but this collection of his letters must certainly be among the most varied and revealing about every aspect of the man. Organized by themes such as "Old Friends," "Running for Office," "Core Beliefs," "The Critics," and "Foreign Leaders," the book contains over 1,000 letters stretching from 1922 to 1994. Whether discussing economic policy with a political foe, dispensing marital advice, or sharing a joke with a pen pal, Reagan comes across as gracious, caring, and inquisitive. Even when responding to blistering criticism, he remained fair and thoughtful. As one would expect, many of the letters are addressed to world leaders, well-known American politicians, pundits, and journalists, and these are certainly interesting for their historical relevance and insights into Reagan's diplomatic style. Among the more fascinating notes, however, are those sent to private citizens, some of which are quite long and detailed. That Reagan would spend the time, as both governor of California and President, to respond to the concerns and inquiries of constituents reveals that he never forgot how he got to his positions of leadership in the first place. He even went so far on occasions to help make business connections for people he had never met in person. He also sent many letters to children. In one, he encouraged a young student to turn off the TV and grab a book instead: "Reading is a magic carpet and you can never be lonely if you learn to enjoy a good book." Taken as a whole, these revealing, well-written, and entertaining letters trace the story of Reagan's life and times as well as any standard biography. They also offer further proof of why he was dubbed "The Great Communicator." --Shawn Carkonen

Kiron K. Skinner is an assistant professor of political science at Carnegie Mellon University, and a Hoover Institution research fellow. Her articles have appeared in The Wall Street Journal and National Interest. She earned her Ph.D. from Harvard University.

1. Reagan: A Life In Letters

2. Reagan: A Life In Letters

3. Reagan: A Life In Letters

5. Reagan: A Life In Letters

6. Reagan: A Life In Letters

9. Reagan: A Life In Letters