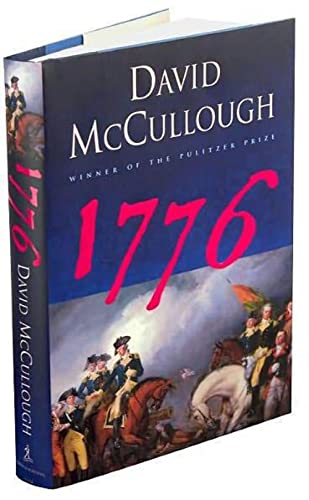 America’s beloved and distinguished historian presents, in a book of breathtaking excitement, drama, and narrative force, the stirring story of the year of our nation’s birth, 1776, interweaving, on both sides of the Atlantic, the actions and decisions that led Great Britain to undertake a war against her rebellious colonial subjects and that placed America’s survival in the hands of George Washington.

In this masterful book, David McCullough tells the intensely human story of those who marched with General George Washington in the year of the Declaration of Independence—when the whole American cause was riding on their success, without which all hope for independence would have been dashed and the noble ideals of the Declaration would have amounted to little more than words on paper.

Based on extensive research in both American and British archives, 1776 is a powerful drama written with extraordinary narrative vitality. It is the story of Americans in the ranks, men of every shape, size, and color, farmers, schoolteachers, shoemakers, no-accounts, and mere boys turned soldiers. And it is the story of the King’s men, the British commander, William Howe, and his highly disciplined redcoats who looked on their rebel foes with contempt and fought with a valor too little known.

Written as a companion work to his celebrated biography of John Adams, David McCullough’s 1776 is another landmark in the literature of American history.

Esteemed historian David McCullough covers the military side of the momentous year of 1776 with characteristic insight and a gripping narrative, adding new scholarship and a fresh perspective to the beginning of the American Revolution. It was a turbulent and confusing time. As British and American politicians struggled to reach a compromise, events on the ground escalated until war was inevitable. McCullough writes vividly about the dismal conditions that troops on both sides had to endure, including an unusually harsh winter, and the role that luck and the whims of the weather played in helping the colonial forces hold off the world's greatest army. He also effectively explores the importance of motivation and troop morale--a tie was as good as a win to the Americans, while anything short of overwhelming victory was disheartening to the British, who expected a swift end to the war. The redcoat retreat from Boston, for example, was particularly humiliating for the British, while the minor American victory at Trenton was magnified despite its limited strategic importance.

Some of the strongest passages in 1776 are the revealing and well-rounded portraits of the Georges on both sides of the Atlantic. King George III, so often portrayed as a bumbling, arrogant fool, is given a more thoughtful treatment by McCullough, who shows that the king considered the colonists to be petulant subjects without legitimate grievances--an attitude that led him to underestimate the will and capabilities of the Americans. At times he seems shocked that war was even necessary. The great Washington lives up to his considerable reputation in these pages, and McCullough relies on private correspondence to balance the man and the myth, revealing how deeply concerned Washington was about the Americans' chances for victory, despite his public optimism. Perhaps more than any other man, he realized how fortunate they were to merely survive the year, and he willingly lays the responsibility for their good fortune in the hands of God rather than his own. Enthralling and superbly written, 1776 is the work of a master historian. --Shawn Carkonen

With his riveting, enlightening accounts of subjects from Johnstown Flood to John Adams, David McCullough has become the historian that Americans look to most to tell us our own story. In his Amazon.com interview, McCullough explains why he turned in his new book from the political battles of the Revolution to the battles on the ground, and he marvels at some of his favorite young citizen soldiers who fought alongside the remarkable General Washington.

More Reading on the Revolution