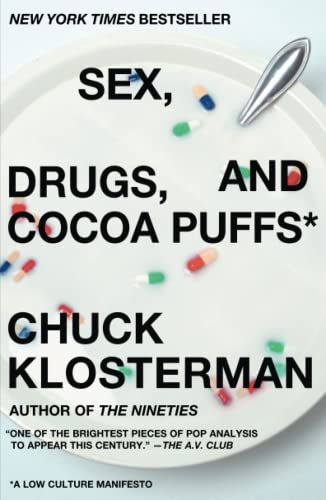 Over half a million copies sold!
From the author of the highly acclaimed heavy metal memoir, Fargo Rock City, comes another hilarious and discerning take on massively popular culture—set in Chuck Klosterman’s den and your own—covering everything from the effect of John Cusack flicks to the crucial role of breakfast cereal to the awesome power of the Dixie Chicks.

Whether deconstructing Saved by the Bell episodes or the artistic legacy of Billy Joel, the symbolic importance of The Empire Strikes Back or the Celtics/Lakers rivalry, Chuck will make you think, he’ll make you laugh, and he’ll drive you insane—usually all at once. Sex, Drugs, and Cocoa Puffs is ostensibly about art, entertainment, infotainment, sports, politics, and kittens, but—really—it’s about us. All of us. As Klosterman realizes late at night, in the moment before he falls asleep, “In and of itself, nothing really matters. What matters is that nothing is ever ‘in and of itself.’” Read to believe.

There's quite a bit of intelligent analysis and thought-provoking insight packed into the pages of Chuck Klosterman's Sex, Drugs, and Cocoa Puffs, which is a little surprising considering how darn stupid most of Klosterman's subject matter actually is. Klosterman, one of the few members of the so-called "Generation X" to proudly embrace that label and the stereotypical image of disaffected slackers that often accompanies it, takes the reader on a witty and highly entertaining tour through portions of pop culture not usually subjected to analysis and presents his thoughts on Saved by the Bell, Billy Joel, amateur porn, MTV's The Real World, and much more. It would be easy in dealing with such subject matter to simply pile on some undergraduate level deconstruction, make a few jokes, and have yourself a clever little book. But Klosterman goes deeper than that, often employing his own life spent as a member of the lowbrow target demographic to measure the cultural impact of his subjects. While the book never quite lives up to the use of the word "manifesto" in the title (it's really more of a survey mixed with elements of memoir), there is much here to entertain and illuminate, particularly passages on the psychoses and motivations of breakfast cereal mascots, the difference between Celtic fans and Laker fans, and The Empire Strikes Back. Sections on a Guns n' Roses tribute band, The Sims, and soccer feel more like magazine pieces included to fill space than part of a cohesive whole. But when you're talking about a book based on a section of cultural history so reliant on a lack of attention span, even the incongruities feel somehow appropriate. --John Moe

Chuck Klosterman is the bestselling author of many books of nonfiction (including Sex, Drugs, and Cocoa Puffs, I Wear the Black Hat, Fargo Rock City and Chuck Klosterman X) and two novels (Downtown Owl and The Visible Man). He has written for The New York Times, The Washington Post, GQ, Esquire, Spin, The Guardian, The Believer, Billboard, The A.V. Club, and ESPN. Klosterman served as the Ethicist for The New York Times Magazine for three years, and was an original founder of the website Grantland with Bill Simmons.

Book Description Paperback. Condition: new. Paperback. Countless writers and artists have spoken for a generation, but no one has done it quite like Chuck Klosterman. With an exhaustive knowledge of popular culture and an almost effortless ability to spin brilliant prose out of unlikely subject matter, Klosterman attacks the entire spectrum of postmodern America: reality TV, Internet porn, Pamela Anderson, literary Jesus freaks, and the real difference between apples and oranges (of which there is none). And don&#039;t even get him started on his love life and the whole Harry-Met-Sally situation. Whether deconstructing &quot;Saved by the Bell&quot; episodes or the artistic legacy of Billy Joel, the symbolic importance of &quot;The Empire Strikes Back&quot; or the Celtics/Lakers rivalry, Chuck will make you think, he&#039;ll make you laugh, and he&#039;ll drive you insane &mdash; usually all at once. &quot;Sex, Drugs, and Cocoa Puffs&quot; is ostensibly about art, entertainment, infotainment, sports, politics, and kittens, but &mdash; really &mdash; it&#039;s about us. All of us. As Klosterman realizes late at night, in the moment before he falls asleep, &quot;In and of itself, nothing really matters. What matters is that nothing is ever &#039;in and of itself.&#039;&quot; Read to believe. From the author of &quot;Fargo Rock City&quot; comes another hilarious and discerning take on popular culture, exploring everything from the crucial role of breakfast cereal to how John Cusack films destroy the modern meaning of love. Shipping may be from multiple locations in the US or from the UK, depending on stock availability. Seller Inventory # 9780743236010

Book Description Soft cover. Condition: New. First Edition, 6th Printing. BRAND NEW Copy. Softcover/Fine. Collection of 18 comedic essays on American popular culture. Author and essayist. John Klosterman (1972 - ) columnist for Esquire and The New York Times Magazine. Anthology of philosophical concerns within pop-cultural settings; comic provocations. Take the ethical dilemma: ought one allow pain to loved ones, or sheild them and sacrifice yourself? Hypothetically, specifically, if someone vows to break your love's collar bones unless you do such-and-such. Is Klosterman a philosopher? Is he ernest in saying his work (facetiously or not), as "philosophy for shallow people" like himself who considers life's issues through differences of approach between Radiohead & Coldplay, and not that between Socrates & the Sophists? 253 pgs of wild, challening thoughts. Seller Inventory # 019893