Items related to Cosmopolis: A Novel 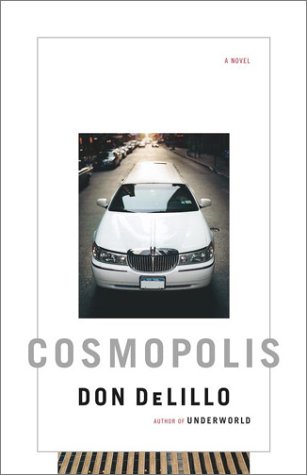 A brilliant billionaire asset manager, en route via white stretch limo to the local haircutter, finds his trip interrupted by a presidential motorcade, music idol's funeral, movie set, and violent political demonstration, and receives a number of important visitors in the fields of security, technology, currency, finance, and theory.

Don Delillo is the author of thirteen novels and two plays. He has won the National Book Award, the PEN/ Faulkner Award for Fiction and the Jerusalem Prize.

Don DeLillo has avid fans who adore the humor, symbolism, and neo-Gothic fantasy of Underworld and his other novels. In this one, a youngish tycoon enters his custom-made limo to traverse Manhattan for a haircut. The journey takes him an entire day, becoming an odyssey of erotic and satiric adventures, ending with a confrontation with his would-be assassin. Echoes of Joyce, Cheever, and Tom Robbins abound. Will Patton lowers his rugged voice to a near whisper, imbuing the entire exercise with a sinister presentiment of doom. In so doing, much of the humor is sacrificed. The combination of murky text and mumbling reader makes the novel difficult to concentrate on. Y.R. © AudioFile 2003, Portland, Maine-- Copyright © AudioFile, Portland, Maine

Book Description Scribner (New York), 2003. Hardcover. Condition: New. Dust Jacket Condition: New. 1st Edition. First edition. First printing. Hardbound. New/New. An unread, perfect copy, SIGNED BY THE AUTHOR on title page. Pristine. Shipped in well padded box. (Smoke-free, no marks, no bruises, not a book club edition, etc.) The author's 13th novel (not counting AMAZONS). A re-interpretation of James Joyce's Ulysses transposed to New York around the time of the collapse of the dot-com bubble in the year 2000. Movie source. Author has signed his name only, with no other writing. Signed by Author(s). Seller Inventory # x1124