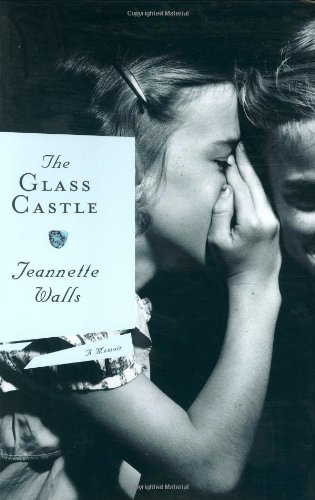 The second child of a scholarly, alcoholic father and an eccentric artist mother discusses her family's nomadic upbringing from the Arizona desert, to Las Vegas, to an Appalachian mining town, during which her siblings and she fended for themselves while their parents outmaneuvered bill collectors and the authorities. 40,000 first printing.

Jeannette Walls's father always called her "Mountain Goat" and there's perhaps no more apt nickname for a girl who navigated a sheer and towering cliff of childhood both daily and stoically. In The Glass Castle, Walls chronicles her upbringing at the hands of eccentric, nomadic parents--Rose Mary, her frustrated-artist mother, and Rex, her brilliant, alcoholic father. To call the elder Walls's childrearing style laissez faire would be putting it mildly. As Rose Mary and Rex, motivated by whims and paranoia, uprooted their kids time and again, the youngsters (Walls, her brother and two sisters) were left largely to their own devices. But while Rex and Rose Mary firmly believed children learned best from their own mistakes, they themselves never seemed to do so, repeating the same disastrous patterns that eventually landed them on the streets. Walls describes in fascinating detail what it was to be a child in this family, from the embarrassing (wearing shoes held together with safety pins; using markers to color her skin in an effort to camouflage holes in her pants) to the horrific (being told, after a creepy uncle pleasured himself in close proximity, that sexual assault is a crime of perception; and being pimped by her father at a bar). Though Walls has well earned the right to complain, at no point does she play the victim. In fact, Walls' removed, nonjudgmental stance is initially startling, since many of the circumstances she describes could be categorized as abusive (and unquestioningly neglectful). But on the contrary, Walls respects her parents' knack for making hardships feel like adventures, and her love for them--despite their overwhelming self-absorption--resonates from cover to cover. --Brangien Davis

Jeannette Walls was born in Phoenix, Arizona, and grew up in the southwest and Welch, West Virginia. She graduated from Barnard College and was a journalist in New York City for twenty years. Her memoir, The Glass Castle, a triumphant account of overcoming a difficult childhood with her dysfunctional but vibrant family, has been a New York Times bestseller for over three years. A publishing sensation around the world, The Glass Castle has sold more than 2.5 million copies in the U.S. and has been translated into twenty-two languages. Walls is the recipient of numerous honors, including the Christopher Award for helping to "affirm the highest values of the human spirit,” as well as the American Library Association’s Alex Award, and the Books for Better Living Award. The Glass Castle was chosen as Elle magazine's book of the year. Walls lives in rural Virginia with her husband, the writer John Taylor.