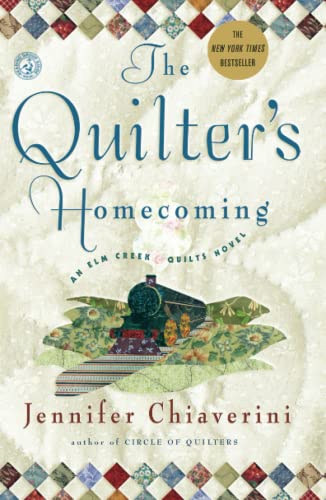 A Roaring Twenties tale of boom and bust unfolds as young bride Elizabeth Bergstrom Nelson sets off with her husband, Henry, from her family home of Elm Creek Manor in Pennsylvania to start a new life in the unfamiliar terrain of southern California. Expecting to assume ownership of Triumph Ranch, the couple instead learns that their deed is a fake, and that they must work for the rightful proprietors to earn their keep. Resourceful Elizabeth trades her trousseau—including the fine quilts stitched by her Bergstrom relatives—for the practical goods the Nelsons need to survive, and finds friendship with California native Rosa Diaz Barclay. When Elizabeth discovers a mysterious cache of quilts made by a member of the Diaz family that reveals a misplaced legacy of love, land, and ancestral ties, it becomes clear that only by stitching the rift between the past and the future can the inhabitants of Triumph Ranch hope to live in peace alongside history.

Jennifer Chiaverini is the author of the New York Times bestselling Elm Creek Quilts series, five collections of quilt projects, and several historical fiction novels. A graduate of the University of Notre Dame and the University of Chicago, she lives with her husband and sons in Madison, Wisconsin. To learn more, visit JenniferChiaverini.com.

As her father's car rumbled across the bridge over Elm Creek and emerged from the forest of bare-limbed trees onto a broad, snow-covered lawn of the Bergstrom estate, Elizabeth Bergstrom was seized by the sudden and unshakable certainty that she should not have come to this place. She should have stayed in Harrisburg, Pennsylvania, to help her brother run the hotel, even though business invariably slowed during the holiday week. Or she should have offered to help care for her sister's newborn twins. Even celebrating Christmas alone would have been preferable to returning to Elm Creek Manor. Her lifelong feelings of warmth and comfort toward the family home had suddenly given way to dread and foreboding. She would have to pass the week next door to Henry, knowing that he was near, and waiting in vain for him to come to her.

As Elm Creek Manor came into view, Elizabeth watched her father straighten in the driver's seat, his leather-gloved fingers flexing around the steering wheel of the new Model T Ford, an unaccustomed look of ease and contentment on his face. He never drank at Elm Creek Manor, nor in the days leading up to their visits, which made Elizabeth wonder why he could not abstain in Harrisburg as well. Apparently he craved his brothers' approval more than that of his wife and children, not that anyone but Elizabeth ever complained about his drinking.

"We're almost home," Elizabeth's father said. Her mother responded with an almost inaudible sniff. It irked her that after all these years, her husband still referred to Elm Creek Manor as home, rather than their stylish apartment in the hotel her father had turned over to their management upon their marriage. Second only to her father's flagship hotel, the Riverview Arms was smartly situated on the most fashionable street in Harrisburg, just blocks from the capitol building. It was a good living, much more reliable and lucrative than raising horses for Bergstrom Thoroughbreds. On his better days, George remembered that, but his insistence upon calling Elm Creek Manor home smacked of ingratitude.

But in this matter, if nothing else, Elizabeth understood her father. Of course Elm Creek Manor was home. The first Bergstroms in America had established the farm in 1857 and ever since, their family had run the farm and raised their prizewinning horses there, building on to the original farmhouse as the number of their descendants grew. They had lived, loved, argued, and celebrated within those gray stone walls for generations. But it was her father's fate to fall in love with a girl who loved the comforts of the city too much to abandon them for life on a horse farm. He could not have Millie and Elm Creek Manor both, so he accepted his future father-in-law's offer to sell his stake in Bergstrom Thoroughbreds and invest the profits in the Riverview Arms. Still, though he had sold his inheritance to his siblings, Elizabeth's father would always consider Elm Creek Manor the home of his heart.

And so would she, Elizabeth told herself firmly. Though Elm Creek Manor would never belong to her the way it would her cousins, every visit would be a homecoming for as long as she lived. She would not mourn for what was lost, whether an inheritance sold off before it could pass to her, or the love of a good man whose affection she had taken for granted.

Her father parked in the circular drive and took his wife's hand to help her from the car. Elizabeth climbed down from the backseat unassisted. A host of aunts, uncles, and cousins greeted them at the door at the top of the veranda. Uncle Fred embraced his younger brother while dear Aunt Eleanor kissed Elizabeth's mother on both cheeks. Aunt Eleanor's eyes sparkled with delight to have the family reunited again, but she was paler and thinner than she had been when Elizabeth last saw her, at the end of summer. Aunt Eleanor had heart trouble and had never in Elizabeth's memory been robust, but she was so spirited that one could almost forget her affliction. Elizabeth wondered if those who lived with her daily were oblivious to how she weakened by imperceptible degrees.

Suddenly Elizabeth's four-year-old cousin, Sylvia, darted through the crowd of taller relatives and took hold of Elizabeth's sleeve. "I thought you were never going to get here," she cried. "Come and play with me."

"Let me at least get though the doorway," said Elizabeth, laughing as Sylvia tugged off her coat. She had hoped to linger long enough to ask Aunt Eleanor -- casually, of course -- if she had any news of the Nelson family, but Sylvia seized her hand and led her across the marble foyer and up two flights of stairs to the nursery before Eleanor could even give her aunt and uncle a proper greeting.

Elizabeth would have to wait until supper to learn no one had seen Henry Nelson since the harvest dance in early November, except to wave to him from a distance as he worked in the fields with his brothers and father. Elizabeth feigned indifference, but her heart sank at the thought of Henry with some other girl on his arm -- someone pretty and cheerful who didn't spend half her time in a far-distant city writing teasing letters about all the fun she was having with other young men. It was probably too much to hope Henry had danced only with his sister.

By the next morning Elizabeth had persuaded herself that she didn't care how Henry might have carried on at some silly country dance. After all, since they had said good-bye at the end of the summer, she had attended many dances, shows, and clubs, always escorted by one handsome fellow or another. Her mother worried that she was running with a fast crowd, but her father, who should have known better since his own hotel had a nightclub, assumed Elizabeth and her friends passed the time together as his own generation had -- in carefully supervised, sedate activities where young men and women congregated on opposite sides of the room unless prompted by a chaperone to interact. Elizabeth's mother had a more vivid imagination, and it was she who waited up for her youngest daughter with the lights on until she was safely tucked into bed on Friday and Saturday nights.

Every summer, Elizabeth surprised her mother by willingly abandoning the delights of the city for Elm Creek Manor. Millie, oblivious to the appeal of the solace and serenity of the farm, always expected Elizabeth to put up more of an argument. Elizabeth certainly did about everything else. She wanted to bob her hair and wear dresses with hemlines up to her knee. She plastered her bedroom walls with magazine photographs of Paris, London, Venice, and other places she was highly unlikely to visit, covering up the perfectly lovely floral wallpaper selected by Millie's mother when the hotel was built. She chatted easily with young men, guests of the hotel, before they had been properly introduced. Millie shook her head in despair over her daughter's seeming indifference to how things looked, to what people thought. Why should anyone believe she was a well-brought-up girl if she didn't behave like one?

Yet every year as spring turned to summer, Elizabeth found herself longing for the cool breeze off the Four Brothers Mountains, the scent of apple blossoms in the orchard, the grace and speed of the horses, the awkward beauty of the colts, the warmth and affection of her aunts and uncles and grandparents. She felt at ease at Elm Creek Manor. Her meddling mother was far away. She was in no danger of walking into a room to find her father passed out over a ledger, an empty brandy bottle on the desk. There was only comfort and acceptance and peace. And Henry.

Once he had only been Henry Nelson from the next farm over, a boy more her brother's friend than her own. All the children played together, Bergstroms and Nelsons, meeting at the flat rock beneath the willow next to Elm Creek after chores were done, and running wild in the forests until they were called home for supper. They met again after evening chores and stayed out well after dark, playing hide-and-seek and Ghost in the Graveyard. One hot August night on the eve of her return to the city, Elizabeth, her brother Lawrence, Henry, and Henry's brother climbed to the top of a haystack and lay on their backs watching the night sky for shooting stars. One by one the other children crept off home to bed, but Elizabeth felt compelled to stay until she had counted one hundred shooting stars. Secretly, she had convinced herself that if she could stay awake long enough to count one hundred stars, her parents would decide that they could stay another day.

She had only reached fifty-one when Lawrence sat up and brushed hay from his hair. "We should go in."

"I'm not letting you walk back alone in the dark. You'll probably trip over a rock and fall in the creek."

The darkness hid Elizabeth's scarlet flush of shame and anger. Lawrence never made any effort to disguise his certainty that his youngest sister would fail at everything she tried. "I will not. I know the way as well as you."

"I'll walk back with her," said Henry.

Lawrence agreed, glad to be rid of the burden, then he slid down from the haystack and disappeared into the night.

"Thank you," she said, after a while. She lay back and gazed up at the starry heavens, hay prickling beneath her, warm and sweet from the sun. After a time, Henry's hand touched hers, and closed around it. Warmth bloomed inside her, and she knew suddenly that after this summer, everything would be different. Henry had chosen her over her brother. Henry was hers.

After that, whenever Henry came to Elm Creek Manor, Elizabeth knew she was the person he had come to see. They began exchanging letters during the months they were separated, letters in which each confided more about their hopes and fears than either would have been able to say aloud. Whenever they reunited after a long absence, Elizabeth always experienced a fleeting moment of shyness, wondering if she should have told him abo...