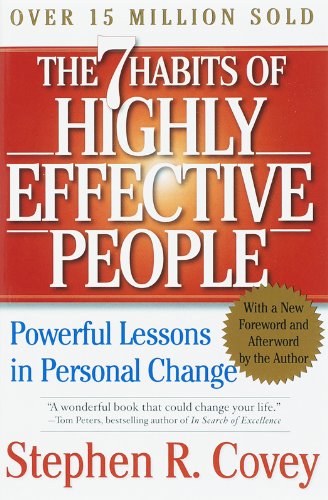 In The 7 Habits of Highly Effective People, author Stephen R. Covey presents a holistic, integrated, principle-centered approach for solving personal and professional problems. With penetrating insights and pointed anecdotes, Covey reveals a step-by-step pathway for living with fairness, integrity, service, and human dignity--principles that give us the security to adapt to change and the wisdom and power to take advantage of the opportunities that change creates.

According to Steven R. Covey, to live with security and wisdom, and to have the power to take advantages of the opportunities that change creates, we need fairness, integrity, honesty and human dignity. Quite a tall order when you consider that most of us live our lives in a permanent state of flux, questioning our ideals and values and fighting a daily battle with the lack of self-confidence that stops us from taking risks of any kind. But, in The Seven Habits of Highly Effective People, Covey manages to make it sound as if changing the way we look at ourselves and the world around us so that we can become more successful both personally and professionally an absolute doddle. He defines the "habits" as "the intersection of knowledge, skill and desire" and states that the "Seven Habits" of the title are not mutually exclusive, but rather when developed together help to form a well-rounded, sensitive, confident and effective human being.

As with many self-help books, much of what you read here is based on basic common sense and can at times be irritatingly obvious. However, what Covey manages to do so successfully is to break down the barriers which prevent all of us from taking a long hard look at ourselves, and then gradually introduces new rules which allow us to move first from dependence to independence and then towards the ultimate goal of interdependence. But of course, the only real way to test the value of The Habits--be proactive, begin with the end in mind, put first things first, think "win/win", seek first to understand and then to be understood, synergise, sharpen the saw-- is to work on them. This book is as good as any place to start on the road to self-awareness and self-improvement in the workplace and in the home without becoming too irritatingly smug and self-satisfied. --Susan Harrison

The late Skip LeFauve President, Saturn Corporation/General Motors Stephen Covey's The 7 Habits of Highly Effective People played a major role in the development of Saturn's operating systems and philosophy. Our commitment to quality and to our customers has its roots in The 7 Habits.

The 7 Habits of Highly Effective People