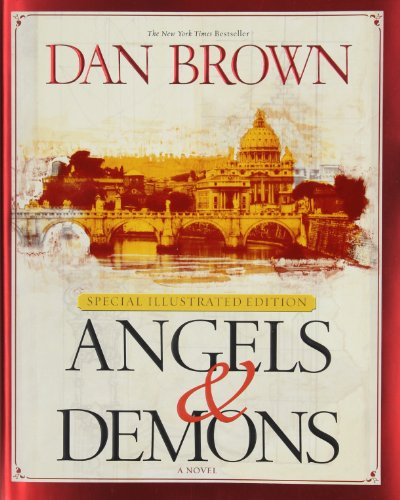 Before The Da Vinci Code there was Angels & Demons, the explosive thriller that introduced the mysterious world of Harvard symbologist Robesrt Langdon. Now Dan Brown's legions of fans can add a breathtaking new dimension to the Angels & Demons reading experience with this Special Illustrated Edition, featuring 150 images of the architectural highlights, religious symbols, paintings, maps, culptures, and locations found in this contemporary classic.

An ancient secret brotherhood. A devastating new weapon of destruction. An unthinkable target. When world-renowned Harvard symbologist Robert Langdon is summoned to a Swiss research facility to analyze a mysterious symbol -- seared into the chest of a murdered physicist -- he discovers evidence of the unimaginable: the resurgence of an ancient secret brotherhood known as the Illuminati...the most powerful underground organization ever to walk the earth. The Illuminati has now surfaced to carry out the final phase of its legendary vendetta against and age-old enemy.

Langdon's worst fears are confirmed on the eve of the Vatican's holy conclave, when a messenger of the Illuminati announces they have hidden an unstoppable time bomb at the very heart of Vatican City. With the countdown under way, Langdon jets to Rome to join forces with Vittoria Vetra, a beautiful and mysterious Italian scientist, to assist the Vatican in a desperate bid for survival.

No Dan Brown library is complete without this lavishly illustrated special edition. No true lover od suspense fiction will be able to resist the exhilarating blend of scholarly intrigue and relentless adventure found in Angels & Demons.

It takes guts to write a novel that combines an ancient secret brotherhood, the Swiss Conseil Européen pour la Recherche Nucléaire, a papal conclave, mysterious ambigrams, a plot against the Vatican, a mad scientist in a wheelchair, particles of antimatter, jets that can travel 15,000 miles per hour, crafty assassins, a beautiful Italian physicist, and a Harvard professor of religious iconology. It takes talent to make that novel anything but ridiculous. Kudos to Dan Brown (Digital Fortress) for achieving the nearly impossible. Angels & Demons is a no-holds-barred, pull-out-all-the-stops, breathless tangle of a thriller--think Katherine Neville's The Eight (but cleverer) or Umberto Eco's Foucault's Pendulum (but more accessible).

Harvard symbologist Robert Langdon is shocked to find proof that the legendary secret society, the Illuminati--dedicated since the time of Galileo to promoting the interests of science and condemning the blind faith of Catholicism--is alive, well, and murderously active. Brilliant physicist Leonardo Vetra has been murdered, his eyes plucked out, and the society's ancient symbol branded upon his chest. His final discovery, antimatter, the most powerful and dangerous energy source known to man, has disappeared--only to be hidden somewhere beneath Vatican City on the eve of the election of a new pope. Langdon and Vittoria, Vetra's daughter and colleague, embark on a frantic hunt through the streets, churches, and catacombs of Rome, following a 400-year-old trail to the lair of the Illuminati, to prevent the incineration of civilization. Brown seems as much juggler as author--there are lots and lots of balls in the air in this novel, yet Brown manages to hurl the reader headlong into an almost surreal suspension of disbelief. While the reader might wish for a little more sardonic humor from Langdon, and a little less bombastic philosophizing on the eternal conflict between religion and science, these are less fatal flaws than niggling annoyances--readers should have no trouble skimming past them and immersing themselves in a heck of a good read. "Brain candy" it may be, but my! It's tasty. --Kelly Flynn

Look Inside the Motion Picture Angels & Demons (Sony Pictures, 2009)
Click on each image below to see a larger view

World-renowned Harvard symboligist Robert Langdon is summoned to a Swiss research facility to analyze a cryptic symbol seared into the chest of a murdered physicist. What he discovers is unimaginable: a deadly vendetta against the Catholic Church by a centuries-old underground organization - the Illuminati. Desperate to save the Vatican from a powerful time bomb, Langdon joins forces in Rome with the beautiful and mysterious scientist Vittoria Vetra. Together they embark on a frantic hunt through sealed crypts, dangerous catacombs, deserted cathedrals, and the most secretive vault on earth . . . the long-forgotten Illuminati lair.