Items related to The Sexual Paradox: Men, Women and the Real Gender...

The Sexual Paradox: Men, Women and the Real Gender Gap 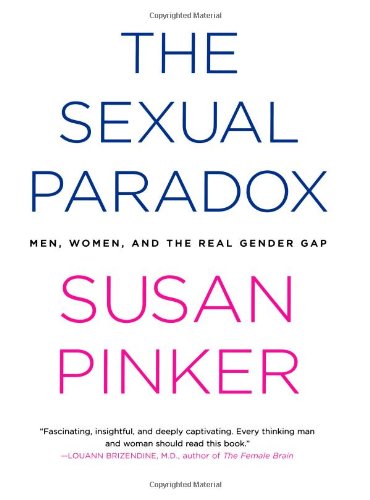 A controversial examination of how learning and behavioral gaps between boys and girls are reversed in the workplace argues that key gender elements, rather than discriminatory practices, contribute to ambition and career choices.

Susan Pinker is a psychologist and a Globe and Mail columnist. Her writing has been recognized in awards from the Periodical Writers Association of Canada and the Canadian Medical Association, and she was a finalist for the John Alexander Media Award, the Aventis Pasteur Medal for Excellence in Health Research Journalism, and the YWCA Woman of Distinction Award in Communications. She has taught in the Department of Educational and Counseling Psychology at McGill University and lives in Montréal with her husband and three children.

Why can't a woman be more like a man?

The question seemed innocent enough in 1964. As sung by Henry Higgins, the lovesick Victorian professor in My Fair Lady, social class was changeable -- just a matter of tweaking accent and costume -- but the gender divide was completely inscrutable. Four decades later the question is still being asked, but with a different twist. Now it usually means "Shouldn't a woman be more like a man?" The frustration is still there, now torqued with unfulfilled expectations.

Like Higgins, most of us don't realize that we think of male as the standard, and of female as a version of this base model -- with just a few optional features added on. We have come to expect that there should be no real differences between the sexes. But the science that's emerging upends the notion that male and female are interchangeable, symmetrical, or the same. To put this book's question plainly, with what we know about the psychology, neuroscience, and economics of people's choices and behavior -- fields that have exploded with amazing findings in the last ten years alone -- how reasonable is it to expect that a woman be more like a man? And how likely is it for a man to be like a woman? This time, it's more about describing what is, than why can't, or shouldn't, because the expectation that male is the starting point seems to have led us astray.

The assumption that female is just a slightly different shade of male was perfectly captured by the predicament the Sesame Street team found itself in when trying to invent a cast of characters for its popular preschool television show. In 2006 The New York Times reported how Sesame Street's producers had long been stymied in creating a female lead puppet out of the anxiety that any girl-like features would play into stereotypes. "If Cookie Monster was a female character, she'd be accused of being anorexic or bulimic," said the show's executive producer. Others on the team agreed that if Elmo were female she'd be seen as ditzy. Especially after the indignant reaction to the Muppet Show's Miss Piggy, it just seemed safest to reflect the common assumption that male was the default setting for both sexes. Male puppets -- whether flightless birds, hairy monsters, or earnest little boys -- were not really male, but generically human. But any female puppets would be viewed as deviant, or as having girl-specific traits. As a result, it took thirty-seven years after Big Bird, Cookie Monster, and Elmo were created for the show's producers to come up with Abby Cadabby, a high-spirited puppet with magical powers and a feminine aesthetic. Her distinctly female persona was a sign that people were beginning to relax about gender, but it still made the news.

I had little idea of how touchy it was when I proposed to combine two areas of personal and professional interest -- extreme or distinctive male traits and women's occupational choices -- in a book about men, women, and work. The plan was to profile several unusual men at least twenty years after they'd had problems as children to see what had become of them. Their stories would contrast with those of gifted women with every chance of success. The human stories were compelling, but then so was the science underlying their experiences. Trying to make sense of their stories was how I entered the politically charged world of sex differences, where, as it turned out, almost everyone I would encounter had already taken sides. Along the way, I discovered that sex differences not only colored my work, but had likely affected my own choices. As in Higgins' song, I started to wonder about myself, my female colleagues and other women I knew, "Why do they do everything their mothers do? Why don't they grow up like their fathers instead?"

I'd had every opportunity. In 1973, at the age of sixteen, I worked for my father. In those years he was a garment manufacturer's agent and for two summer months we companionably drove around rural Québec in his wood-paneled station wagon, the back loaded with a dozen navy sample bags filled with women's uniforms and sleepwear, each bag the size of a fridge and weighing about seventy-five pounds. With new respect I discovered the labor that financed our suburban, middle-class life. His years on the road eventually put three kids through college, my mother through graduate school, and would underwrite his own transition to a successful law career. The work was often lonely and physically exhausting, and like many work landscapes at the time, it was 99 percent male.

By then I was sure that a women could and would do any job a man could. In The Second Sex, Simone de Beauvoir had laid it all out: biology was not destiny. "One is not born, but rather becomes a woman." There was no such thing as a maternal instinct -- humans were not like animals with observable, fixed habits, like rutting deer or baboons who flashed their pink behinds. We were above all that. As humans, we were "forever in a state of change, forever becoming," an existentialist take that certainly matched my sixteen-year-old worldview. So women could be defined by their current situation and their possibilities, but that was it. If there was a healthy demand for nurses' smocks and peignoir sets, it was because society defined women as caregivers and sex objects. But soon all this would change. Of course, I knew nothing about the gulf between this feminist classic and the particulars of the writer's own life, how de Beauvoir allowed herself to be treated by Sartre, not as an equal, but more as an enabler and procurer of pretty young women, some of them as young as I was at the time. But that wouldn't have mattered. What happened in the forties and fifties was history. This was now.

Coming of age at the cusp of second-wave feminism, my expectations diverged sharply from those of previous generations. Unlike the women who matured during the Depression, I counted on an education and a career, not just a job. And like my friends, I didn't think getting married and pregnant was a sufficient future plan. It was precisely the one that had trapped our mothers. In 1963 Betty Friedan had shredded the idyll of postwar domesticity in The Feminine Mystique, portraying suburban housewives as burdened by endless chores, whiny children, and an unnamed, enveloping anomie. These were the original desperate housewives, and Friedan's strident demand that women reject that scenario was not just hot air. "We swallowed it whole," recalled my mother, who had married at nineteen and then spent the next eighteen years at home "wiping the same stretch of counter over and over." (According to the sociologist Juliet Schor, a middle-class mother of three did an average of fifty-three hours of housework a week in 1973.) Galvanized by Friedan, Gloria Steinem, and others, that 1973 summer, my mother started a graduate degree. All her friends were doing the same, returning to jobs they had before they married, or seeking professional training that would allow them to work for pay.

There were other signs of a major societal attitude shift. The birth-control pill had been legal since 1969 in Canada, and some of my high school friends were already on it. A robust postwar economy had launched our sense of infinite possibility, but The Pill boosted it skyward, along with the idealism and individualism of the Vietnam era. None of us expected to have our aspirations curtailed by pregnancy or marriage -- or to have anyone tell us what kind of work we should or could do. The Female Eunuch had just been published, and I was an instant convert to Germaine Greer's lusty prose. Women were conditioned to have the characteristics of a castrate, she wrote, listing passivity, plumpness, timidity, languor, delicacy, and preciousness as the female virtues that were lauded by men, and thus obediently emulated by women. "The new assumption behind the discussion of the body is that everything that we may observe could be otherwise," she wrote. Her italics captured the self-assurance of the era -- and its hopefulness. Everything was mutable. If only women rejected their conditioned roles by refusing to be men's handmaids, by avoiding "menial" jobs like teaching or nursing, and by abandoning the clothes, cosmetics, and even the household appliances that enslaved them, it could be a different world. The assumption was that men had it made; they were the standard, the ones to be emulated. Only when women dumped their female personae and took on men's roles would they truly be equal. It was true that many women in my family and social circle were plump, but I didn't know any who were remotely passive, delicate, timid, or languorous. Still, the idea of a complete overhaul had appeal.

Feminism, along with the sixties zeitgeist, had instilled a powerful belief in the freedom of choice. Behind the cultural facade, we were equal to, if not the same as, men. And once artificial barriers came down, many women assumed we'd lead similar lives. In fact, more progress had been made in my generation than in the previous 150 years, during which American women struggled -- but failed -- to have the same constitutional rights as had been granted to former slaves. Having been lucky enough to have been born when I was, I benefited from the hard-won achievements of second-wave feminism. Enforced domesticity didn't come crashing in on me at the age of twenty. I simply took it for granted that my views had as much value as any man's, and that I had the same rights to education and employment, to vote, to own property, and to decide if and when I'd have children. That I took these truths to be self-evident proved how far women and society had traveled in a short time.

Still, it never occurred to me that women would choose to do this kind of work, the work my father did for years. Sure, his earnings amply supported a family of five. But hoisting sample bags, working alone on the road, and only rarely seeing his family and friends? I mean, how many women would really want to?

1. The Sexual Paradox: Men, Women and the Real Gender Gap

2. The Sexual Paradox: Men, Women and the Real Gender Gap

3. The Sexual Paradox: Men, Women and the Real Gender Gap

5. The Sexual Paradox: Men, Women and the Real Gender Gap