Kutner, Lawrence; Olson, Cheryl Grand Theft Childhood: The Surprising Truth About Violent Video Games and What Parents Can Do

Grand Theft Childhood: The Surprising Truth About Violent Video Games and What Parents Can Do 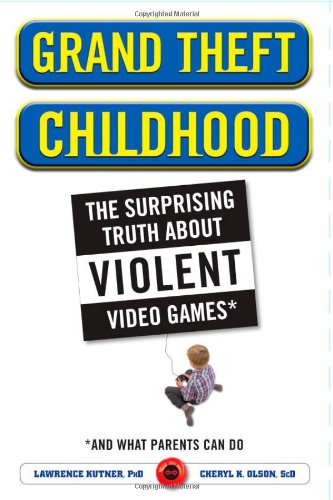 Draws on groundbreaking studies by the Harvard Medical School Center for Mental Health and Media to address key issues pertaining to the influence of video game violence on young people, in a volume that offers insight into the allure of games while counseling parents on how to recognize a problem. 30,000 first printing.

Lawrence Kutner is the author of five books about child psychology. He wrote the award-winning weekly New York Times "Parent & Child" column, was the "Ask the Expert" columnist for Parents magazine and has been a columnist and contributing editor at Parenting and Baby Talk magazines.

Cheryl Olson, a former teen issues columnist for Parents magazine, was the principal investigator of the first federally funded, large-scale research project to take an in-depth look at the effects of electronic games on preteens and teenagers. She has served as a health behavior consultant to a number of nonprofits and corporations, and is an award-winning video producer and writer.

We've been seeing a whole rash of shootings throughout this country and in Europe that relate back to kids who obsessively play violent video games. The kids involved as shooters in Columbine were obsessively playing violent video games. We know after the Beltway sniper incident where the seventeenyear-old was a fairly good shot, but Mr. Muhammad, the police tell us, got him to practice on an ultra-violent video game in sniper mode to break down his hesitancy to kill. -- Washington State representative Mary Lou Dickersonon The NewsHour with Jim Lehrer (PBS), July 7, 2003

THIRTEEN-YEAR-OLD DARREN AND A HALF DOZEN OF HIS video game-playing friends are sitting around a table at the Boys and Girls Club in a working-class section of Boston. We're talking about the games, especially the violent ones. They've all played them.

Darren had a tough time in school earlier this week. On Monday, a teacher said something that embarrassed him in front of his classmates. When he went home that afternoon, he plugged in his video game console, loaded Grand Theft Auto 3, blew up a few cars and shot a half-dozen people, including a young blonde woman. When asked, Darren admits that the woman he killed in the game looked a lot like his teacher.

If you listen to the politicians and the pundits, the relationship is blindingly clear: playing violent video games leads children to engage in real-world violence or, at the very least, to become more aggressive.

In August 2005, the American Psychological Association issued a resolution on violence in video games and interactive media, stating that "perpetrators go unpunished in 73 percent of all violent scenes, and therefore teach that violence is an effective means of resolving conflict."

The attorney for Lee Malvo, the young "DC Sniper," claimed that the teen had taught himself to kill by playing Halo on his Xbox game console. "He's trained and desensitized with video games...to shoot human forms over and over."

We hear that youth violence, as reflected in violent crime and school shootings, is a growing problem, and that young game players are socially isolated and unable to form interpersonal relationships.

A British study by Save the Children was described in the press as finding that "children are struggling to make friends at school because they spend too long playing computer games."5 A spokesperson for that organization added, "Children have always played alone, for example with dolls or train sets, but these activities required a certain level of imagination -- they stimulated their brains. That is not the case with modern computer games, which do children's thinking for them and put them in their own little world."

We're told that the game ratings and content descriptors provided by the Entertainment Software Ratings Board (ESRB) are all that's needed to help parents protect their children from violent and other inappropriate content.

The ESRB employs child development specialists who play each game thoroughly before assigning it a rating that helps parents select which games are most appropriate for their children.

Checking the ratings on the games our children bring home -- and not allowing M-rated games -- is the best way to protect our children from video game violence.

All of these statements are wrong! Some are misunderstandings; others are outright lies. In fact, much of the information in the popular press about the effects of violent video games is wrong.

Guy Cumberbatch, PhD, is a psychologist specializing in media research. He directs the Communications Research Group in Great Britain and has been studying the effects of mass media on violent behavior for several decades. He sums up that research succinctly:

The real puzzle is that anyone looking at the research evidence in this field could draw any conclusions about the pattern, let alone argue with such confidence and even passion that it demonstrates the harm of violence on television, in film and in video games. While tests of statistical significance are a vital tool of the social sciences, they seem to have been more often used in this field as instruments of torture on the data until it confesses something which could justify publication in a scientific journal.

If one conclusion is possible, it is that the jury is not still out. It's never been in. Media violence has been subjected to lynch mob mentality with almost any evidence used to prove guilt.

The strong link between video game violence and real world violence, and the conclusion that video games lead to social isolation and poor interpersonal skills, are drawn from bad or irrelevant research, muddleheaded thinking and unfounded, simplistic news reports:

The allegation that "perpetrators go unpunished in 73 percent of all violent scenes" is based on research from the mid-1990s that looked at selected television programs, not video games.

The video game Halo involves shooting an unrealistic gun at a giant alien bug. It is not an effective way to train as a real sniper. In court, Lee Malvo admitted that he trained by shooting a real gun at paper plates that represented human heads. Also, Malvo had a long history of antisocial and criminal behavior, including torturing small animals -- one of the best predictors of future violent criminal behavior.

It's unlikely that Harris and Klebold's interest in violent video games or other violent media played any significant role in their actions. An FBI investigation concluded that Klebold was significantly depressed and suicidal, and Harris was a sociopath.

Youth violence has decreased significantly over the past decade. You are more likely to be struck and killed by lightning than to die in a school shooting.

Video game popularity and real-world youth violence have been moving in opposite directions. Violent juvenile crime in the United States reached a peak in 1993 and has been declining ever since. School violence has also gone down. Between 1994 and 2001, arrests for murder, forcible rape, robbery and aggravated assaults fell 44 percent, resulting in the lowest juvenile arrest rate for violent crimes since 1983. Murder arrests, which reached a high of 3,800 in 1993, plummeted to 1,400 by 2001.

The U.S. Secret Service intensely studied each of the thirty-seven non-gang and non-drug-related school shootings and stabbings that were considered "targeted attacks" that took place nationally from 1974 through 2000. (Note how few premeditated school shootings there actually were during that twenty-seven-year time period, compared with the public perception of those shootings as relatively common events!) The incidents studied included the most notorious school shootings (e.g., Columbine, Santee, Paducah), in which the young perpetrators had been linked in the press to violent video games. The Secret Service found that there was no accurate profile. Only one in eight school shooters showed any interest in violent video games; only one in four liked violent movies.

On the other hand, reports of bullying are up. While bullying may not make the headlines, it makes a big difference in the everyday lives of our children.16 As you'll see in chapter 4, our research found that certain patterns of video game play were much more likely to be associated with these types of behavioral problems than with major violent crime such as school shootings.

For many children and adolescents, playing video games is an intensely social activity, not an isolating one.

Many games involve multiperson play, with the players either in the same room or connected electronically. They often require that players communicate so that they can coordinate their efforts. Our research found that playing violent video games was associated with playing with friends.

For younger children especially, games are a topic of conversation that allows them to build relationships with peers.

Although it came from a reputable organization, the widely cited British study claiming that increased use of electronic media has led to social isolation among children based its findings on the personal opinions of an unspecified group of primary school teachers who were asked to compare today's children (ages five to eleven) to what they remembered about children who were in their classrooms when they started teaching, not on scientific observations of children conducted over time. Blaming supposed deterioration of social skills among kindergartners and first graders on MP3 players and time spent surfing the Internet is a bit of a stretch, to say the least. Also, the "study" was part of a publicity campaign for Friendship Friday, an annual fund-raising event in Great Britain for Save the Children.

The current ESRB rating system, while more effective and informative than other media rating systems, has significant flaws that need to be addressed.

ESRB raters don't actually play the games at all. They watch videos of excerpts of the games that have been provided by the manufacturers. Until 2007, the Entertainment Software Rating Board employed temporary workers with no background in child development to rate its games. The...

1. Grand Theft Childhood: The Surprising Truth About Violent Video Games and What Parents Can Do

2. Grand Theft Childhood: The Surprising Truth About Violent Video Games and What Parents Can Do

3. Grand Theft Childhood: The Surprising Truth About Violent Video Games and What Parents Can Do

4. Grand Theft Childhood: The Surprising Truth About Violent Video Games and What Parents Can Do Kutner, Lawrence and Olson, Cheryl