Items related to Into the Garden

V.C. Andrews Into the Garden 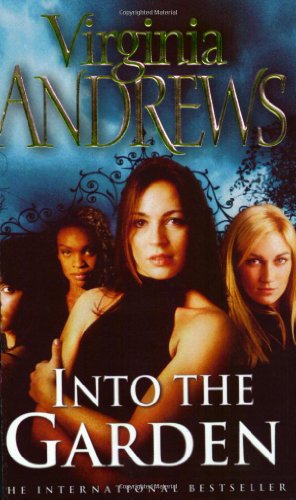 Misty, Star, Jade and Cat first came together in Dr Marlowe's group therapy session. One by one, each of the Wildflowers told her own story and bravely unveiled the inner wounds inflicted by years of lies, deceit and untold family secrets. Each revealed the shocking tales of how their parents hurt them, used them, or simply abandoned them. But then the sessions ended, and the girls didn't know if they would ever see each other again. Now they are coming together again in Jade's parents' sprawling, opulent mansion where the four will rekindle their bonds of friendship and trust. But this time it will be different. Today, in the mansion's attic Star, Jade, Cat and Misty will swear to tell the real truth, the shattering secrets that lie deep within them. And once the darkest secret of all has been spoken aloud, there will be no turning back. For there may be some things the Wildflowers should leave buried forever...

With the publication of her first novel, FLOWERS IN THE ATTIC, Virginia Andrews became a bestselling phenomenon. Since then, readers have been captivated by more than forty novels in the Virginia Andrews' series. Her novels have sold over 100 million copies worldwide and been translated into 22 languages.

When Jade called to invite me, as well as Misty and Star, to her home for our first official meeting of the OWP's, my heart seemed to wake up and beat happiness as well as blood through my veins and arteries. My whole body came alive and lifted as if some heavy chains had been broken. I could almost hear them shatter and clank at my feet.

Geraldine was busy preparing our dinner, cleaning the vegetables for our salad, inspecting every carrot, every lettuce leaf for some imperfection and then pausing to baste the roast chicken, but always listening with one ear tilted in my direction. Our downstairs phone was on the kitchen wall near the door and I had no phone in my room. The only time I could have any privacy during a personal call was when she was upstairs, out of the house, or in the bathroom. The moment I cradled the receiver, she spun on her heels, demanding to know who had called.

"It was Jade," I announced, unable to hide my excitement, "inviting me to her house for a brunch."

"Jade?" Geraldine's small eyes narrowed into suspicious slits, darkened with accusations, fears, and threats. "Isn't she one of them?"

Geraldine usually referred to the other girls in my group therapy as "Them." It made it sound as if they were all monstrous, alien creatures. If they were monstrous, what was I in her eyes? I wondered. She blamed everything on my father when she spoke about it, if she ever spoke about it, but deep down in my heart, I believed she blamed me as well. I could see it and feel it in the way her eyes lingered on me like two tiny spotlights of accusation.

After all, I thought, she had made me feel as if there was something polluted about me because I had been born a child out of an adulterous affair, even if the adulterer was her own mother. Sin was always something contagious in Geraldine's eyes. Why shouldn't she believe I had inherited a tendency toward it?

I couldn't remember her ever looking at me with pleasure, and certainly never with pride. She was always searching for something to criticize as if she had been given the responsibility of ensuring that I never wandered from the path of righteousness, her righteousness. My premature voluptuous figure only reinforced her tarnished image of me. Once she even told me it meant I'd be oversexed, and she always talked about sex as if it was a disease. She often tried to make me feel ashamed of what I looked like and she had even gone so far as to try to prevent me from having a female figure as long as she could, making me wear what were practically straight-jackets when my body started to develop.

"She's one of the girls, yes," I said finally, hoping she wouldn't start criticizing Jade and the others as she had done so many times in the past.

"The girls? You mean those girls from Doctor Marlowe's clinic?" she asked, grimacing as if she had just bitten into a rotten walnut.

Geraldine never had approved of the therapy sessions. She hated the idea of strangers knowing anything intimate about us. She would have had me keep it all locked inside, no matter what damage it did to me. In her way of thinking, you swallowed the bad with the good and you locked it inside and worked, worked, worked, keeping yourself busy to forget whatever was unpleasant or ugly.

"Doctor Marlowe never referred to it as a clinic, Mother. You know we went to her office in her home. You make it sound terrible, like a hospital or a research lab or something with the four of us being treated like guinea pigs," I told her.

She grimaced again, only with more disgust this time. Geraldine could twist her mouth until it almost looked like a corkscrew. She was so thin these days, she hardly had a cheek to pull in, but it dipped in like the center of a saucer when she turned her lips.

"It's just a bunch of hocus-pocus, all this psychological mumbo-jumbo. What did people do before all this counsel and analysis, huh? I'll tell you," she said quickly. As she often did, Geraldine asked a question that she had already answered to her liking in her own mind. "They gritted their teeth and they endured. It made them stronger.

"Nowadays, you have all these moaners and groaners, crying and complaining as soon as they're in the least bit of difficulty. They're even on television -- television! And why? To tell the most personal things! People have no shame anymore. They are willing to tell complete strangers their most private secrets and business, for the whole world to see and know. Disgusting.

"We're just thinning the blood with all this stupidity," she insisted, "thinning the blood, making ourselves weak and pitiful. There's no grit. People have no self-respect and these so-called doctors just encourage it all."

"Doctor Marlowe has helped us, Mother, helped all of us through very difficult times," I insisted.

"Um," she said, grinding her teeth. "Well, I don't want you associating yourself with such girls. I didn't like the idea of that doctor bringing you all together like that in the first place. It wasn't healthy."

She stared at me, her eyes turning red with fear and shock.

"No, they each have a different problem, none of them like mine," I said quickly.

She recovered instantly, whipping her upper body ramrod straight. She hated anything that even vaguely suggested what had happened.

"What good will come of you being around girls with problems, Cathy? You're just going to poison the well some more. They can't be good influences. If you were sick with pneumonia, would it be good for you to hang around with patients sick with tuberculosis? No, of course not. If this Doctor Marlowe thought you were in need of help, why would she mix you in with other girls who were sick, too? To make more money, faster, that's why," she said.

"Technique," she spat. "They have all sorts of words, to cloud the truth and get away with their hocus-pocus. I don't want you having anything more to do with those girls, hear?"

"No but's, Cathy. I have all the responsibility now. Always did," she spat. "You go off and get into trouble with some disturbed teenage girls and I have more to handle. It's enough running this house and making sure you get what you need."

"Friends, yes, but not mental cripples," she insisted, and turned her back on me.

She slammed a pot down on the counter so hard, I felt my insides jump into my throat. Then she turned toward me, wagging the pot she gripped in her hand like a club.

"You'll not be disobedient now," she warned. "I'm legally your mother and I'm still the one responsible for you, and you'll obey, hear?"

I stared at her. Suddenly, she turned from flushed red to the whitest pale and fell back against the counter.

She waved me off.

"Nothing," she said, taking a deep, and what looked like a painful, breath. "It's just a little dizzy spell. Go tend to your own chores. I'll be calling you to set the table soon."

She clutched her stomach and chest as if to keep everything inside and turned her back to me. I waited and watched until she straightened up her bony shoulders, this time with more effort, and then returned to what she was doing. She moaned under her breath, but said no more. I watched her for a moment before leaving the kitchen.

I was determined to go to Jade's house. I wouldn't be shut out. I hadn't told Geraldine that the brunch was tomorrow. I would sneak out and go, I thought. I would just use her golden rule: what she doesn't kno

1. Into the Garden (Wildflowers 5)