Items related to Band of Brothers 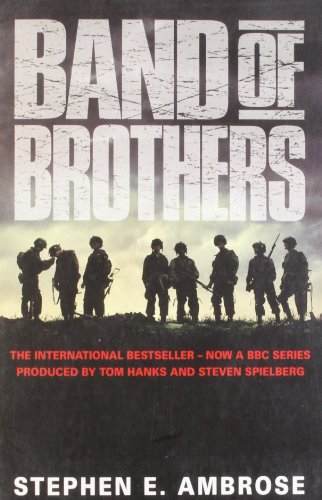 They fought on Utah Beach, in Arnhem, Bastogne, the Bulge; they spearheaded the Rhine offensive and took possession of Hitler's Eagle's Nest in Berchtesgaden. Easy Company, 506th Airborne Division, U.S. Army, was as good a rifle company as any in the world. From their rigorous training in Georgia in 1942 to D-Day and victory, Ambrose tells the story of this remarkable company, which kept getting the tough assignments. Easy Company was responsible for everything from parachuting into France early D-Day morning to the capture of Hitler's Eagle's Nest at Berchtesgaden. BAND OF BROTHERS is the account of the men of this remarkable unit who fought, went hungry, froze, and died, a company that took 150 percent casualties and considered the Purple Heart a badge of office. Drawing on hours of interviews with survivors as well as the soldiers' journals and letters, Stephen Ambrose tells the stories, often in the men's own words, of these American heroes.

The men of E Company, 506th Regiment, 101st Airborne, volunteered for this elite fighting force because they wanted to be the best in the army--and avoid fighting alongside unmotivated, out-of-shape draftees. The price they paid for that desire was long, arduous, and sometimes sadistic training, followed by some of the most horrific battles of World War II. Actor Cotter Smith--a veteran of numerous TV movies and Broadway plays--spins Stephen Ambrose's tale with almost laconic ease. Anecdote by anecdote, he lets the power of the story build. By the time the company has gotten through D-day and seized Hitler's Eagle's Nest in Bavaria, we feel we know as much about the men and their missions as we do about our own brothers. (Running time: 5 hours, 4 cassettes) --Lou Schuler

Stephen E. Ambrose, leading World War II historian, was the author of numerous books on history including the Number 1 bestselling BAND OF BROTHERS, D-DAY (on which SAVING PRIVATE RYAN was based) PEGASUS BRIDGE and WILD BLUE. He is founder of the Eisenhower Center and the National D-Day Museum in New Orleans. He died in 2002.