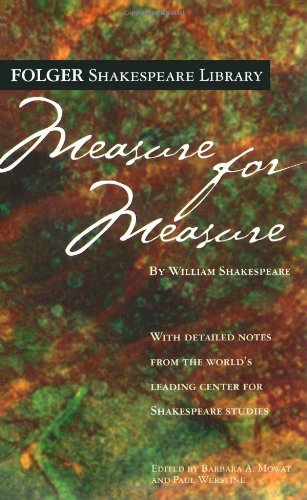 Measure for Measure is among the most passionately discussed of Shakespeare’s plays. In it, a duke temporarily removes himself from governing his city-state, deputizing a member of his administration, Angelo, to enforce the laws more rigorously. Angelo chooses as his first victim Claudio, condemning him to death because he impregnated Juliet before their marriage.

Claudio’s sister Isabella, who is entering a convent, pleads for her brother’s life. Angelo attempts to extort sex from her, but Isabella preserves her chastity. The duke, in disguise, eavesdrops as she tells her brother about Angelo’s behavior, then offers to ally himself with her against Angelo.

Modern responses to the play show how it can be transformed by its reception in present culture to evoke continuing fascination. To some, the duke (the government) seems meddlesome; to others, he is properly imposing moral standards. Angelo and Isabella’s encounter exemplifies sexual harassment. Others see a woman’s right to control her body in Isabella’s choice between her virginity and her brother’s life.

The authoritative edition of Measure for Measure from The Folger Shakespeare Library, the trusted and widely used Shakespeare series for students and general readers, includes:

Like every other play in the Cambridge School Shakespeare series, Measure for Measure has been specially prepared to help all students in schools and colleges. This version of Measure for Measure aims to be different from other editions of the play. It invites you to bring the play to life in your classroom through enjoyable activities that will help increase your understanding. You are encourage to make up your own mind about the play, rather than have someone else's interpretation handed down to you. Whatever you do, remember that Shakespeare wrote his plays to be acted, watched and enjoyed.

Book Description Condition: New. Brand New Paperback International Edition.We Ship to PO BOX Address also. EXPEDITED shipping option also available for faster delivery.This item may ship from the US or other locations in India depending on your location and availability. Seller Inventory # ABBUS-21943

Book Description Condition: New. Brand New Paperback International Edition.We Ship to PO BOX Address also. EXPEDITED shipping option also available for faster delivery.This item may ship from the US or other locations in India depending on your location and availability. Seller Inventory # ABBUS-21842

Shipping: US$ 24.19
From United Kingdom to U.S.A.
Destination, rates & speeds