Items related to When Jessie Came Across the Sea

Hest, Amy When Jessie Came Across the Sea

When Jessie Came Across the Sea 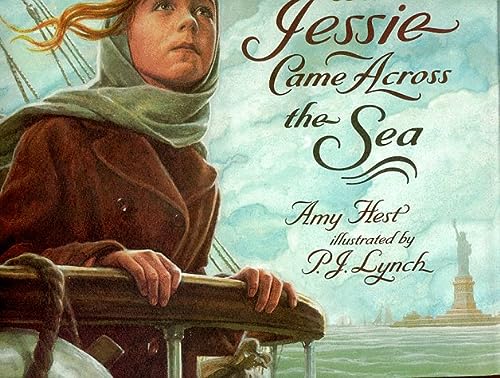 Set at the turn of the 19th century, this is the story of Jessie who lives with her grandmother in a poor village. Their life is simple, but happy. Then one day, the village rabbi receives a ticket to America and decides that Jessie should be the one to go. The story of her journey unfolds.

Amy Hest is the author of many much-loved and bestselling picture books, including Kiss Good Night, illustrated by Anita Jeram, and Charley's First Night and When Charley Met Granpa, illustrated by Helen Oxenbury. About this book, she says, "I love snuggling up with someone special on those beautiful snowy nights ... I love cocoa!" Amy Hest lives in New York City, USA. Find her online at www.amyhest.com.P.J. Lynch has won many awards throughout his incredible illustrative career, including the Mother Goose Award, the Christopher Medal three times, the Irish Bisto Book of the Year award and the prestigious Kate Greenaway Medal on two occasions, first for The Christmas Miracle of Jonathan Toomey by Susan Wojciechowski, and again for When Jessie Came Across the Sea by Amy Hest. He lives in Dublin with his wife and their three young children. Find him online at www.pjlynchgallery.blogspot.co.uk and on Twitter as @PJLynchArt.

Grade 2-4?This narrative of 13-year-old Jessie's journey from a poor village in Eastern Europe to New York City at the turn of the century affords readers a panoramic view of events and people. The author's exploration of a variety of emotions and feelings provides modern youngsters with a sense of connections with times long past. There is the familial devotion between Jessie and her grandmother, whom she has to leave behind. A shipboard friendship with Lou, a young shoemaker, helps Jessie survive the hardships and uncertainties of the ocean crossing. Her skill as a lacemaker, painstakingly learned from her grandmother, insures her success in the dressmaker's shop where she goes to work. Her romance with Lou is rekindled when they meet years later on a wintry day in Central Park. Jessie's reunion with her grandmother, whose ticket she has purchased with money saved during years of hard work, is the poignant conclusion to this tale. Lynch's luminous watercolor and gouache illustrations capture the characters' feelings, at the same time recording the storms at sea and teeming streets of the Lower East Side. The two young people's spirit of hope and optimism, created by the straightforward text, is enhanced by these pictures, as they provide a visual record of difficulties encountered by the scores of immigrants who reached these shores. This book will be particularly useful for units on immigration and family histories, used in conjunction with Allen Say's Grandfather's Journey (Houghton, 1993) or Jeanette Winter's Klara's New World (Knopf, 1992; o.p.).?Martha Rosen, Edgewood School, Scarsdale, NY
Copyright 1997 Reed Business Information, Inc.

1. WHEN JESSIE CAME ACROSS THE SEA

2. WHEN JESSIE CAME ACROSS THE SEA