Items related to A Century of War: Anglo-American Oil Politics and the...

A Century of War: Anglo-American Oil Politics and the New World Order 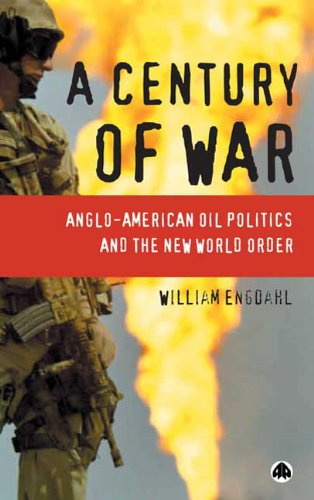 This book is a gripping account of the murky world of the international oil industry and its role in world politics. Scandals about oil are familiar to most of us. From George W. Bush's election victory to the wars in Iraq and Afghanistan, US politics and oil enjoy a controversially close relationship. The US economy relies upon the cheap and unlimited supply of this single fuel. William Engdahl takes the reader through a history of the oil industry's grip on the world economy. His revelations are startling.

William Engdahl has written on issues of energy, politics and economics for more than 30 years, beginning the first oil shock in the early 1970's. After a degree in politics from Princeton University and graduate study in comparative economics at the University of Stockholm, he worked as a free-lance writer in New York and later in Europe, covering subjects including IMF policy in the former Soviet Union, Third World debt issues, hedge funds and the Asia crisis. Mr. Engdahl has contributed regularly to a number of publications including Japan's Nihon Keizai Shimbun, Foresight magazine; Grant'sInvestor.com, European Banker and Business Banker International. He has spoken at numerous international conferences on geopolitical, economic and energy subjects, from London to Jakarta to Moscow. He currently lives in Germany and in addition to writing regularly on issues of economics, energy and international affairs.

1. A Century of War: Anglo-American Oil Politics and the New World Order

3. A Century of War: Anglo-American Oil Politics and the New World Order