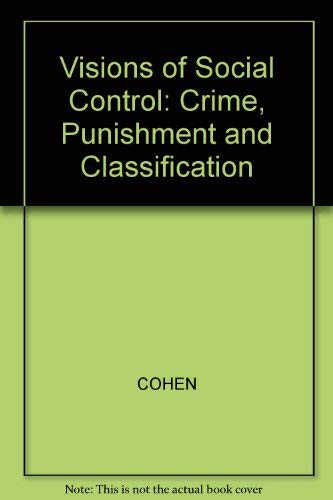 This volume presents an analysis of social control, punishment and classification.

Visions of Social Control is a wide ranging analysis of recent shifts in ideas and practices for dealing with crime and delinquency.
In Great Britain, North America and Western Europe, the 1960's saw new theories and styles of social control which seemed to undermine the whole basis of the established system. Such slogans as 'decarceration' and 'division' radically changed the dominance of the prison, the power of professionals and the crime-control system itself.

Stanley Cohen traces the historical roots of these apparent changes and reforms, demonstrates in detail their often paradoxical results and speculates on the whole future of social control in Western societies. He has produced an entirely original synthesis of the original literature as well as an introductory guide to the major theoreticians of social control, such as David Rothman and Michael Foucault. This is not just a book for the specialist in criminology, social problems and the sociology of deviance but raises a whole range of issues of much wider interest to the social sciences. A concluding chapter on the practical and policy implications of the analysis is of special relevance to social workers and other practitioners.

This is an indispensable book for anyone who wants to make sense of the bewildering recent shifts in ideology and policy towards crime - and to understand the broader sociological implications of the study of social control.

Stanley Cohen is at the London School of Economics and Political Science. He is the author of numerous books, including Visions of Social Control (Polity, 1985), Folk Devils and Moral Panics:The Creation of the Mods and Rockers (1980), Against Criminology (1988) and Psychological Survival: The Experience of Long Term Imprisonment (1973).

Book Description Polity Press, 1985. Condition: Good. This is an ex-library book and may have the usual library/used-book markings inside.This book has hardback covers. In good all round condition. Please note the Image in this listing is a stock photo and may not match the covers of the actual item,700grams, ISBN:0745600204. Seller Inventory # 6777763

Book Description Polity Press, 1985. Condition: Fair. This is an ex-library book and may have the usual library/used-book markings inside.This book has hardback covers. In fair condition, suitable as a study copy. No dust jacket. Please note the Image in this listing is a stock photo and may not match the covers of the actual item,700grams, ISBN:0745600204. Seller Inventory # 7172008