Items related to The Kingfisher Book of Evolution

The Kingfisher Book of Evolution 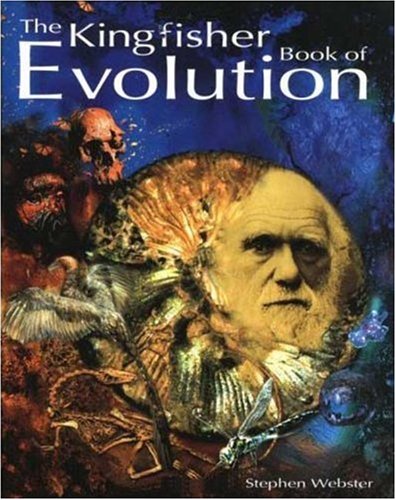 Examines the evolution of life on Earth from the perspectives of religion, myth, and history--from the first primitive organisms to modern humans--and attempts to look into the future. 12,000 first printing.

Gr 5-9-This ambitious undertaking attempts to be all encompassing, but it is fragmentary and simplistic. Going beyond the basic tenet of explaining the complexities of evolution, Webster includes a section on future evolutionary trends as well, incorporating cloning and gene therapy, the possible direction of human evolution, and even includes "alien" evolutionary possibilities. Divided into double-page "chapters" that constrict the information flow, the text is further broken down into captions and headed paragraphs. Certain complex concepts do not fare well with such oversimplification. Take, for example, the assertion that "All mammals are intelligent creatures, good parents, and very sociable-." Intelligent probably, but not always good parents (watch the nightly news), and not always sociable (North American badgers, grizzly bears, and most wild felines, to name a few, tend to be loners). The glossary defines an atom as "The smallest particle of matter." The artwork, some of which is merely decorative, consists of a plethora of photos, colorful illustrations, and diagrams scattered on every page. Some of the diagrams-e.g., that of migrating arctic terns-are a tad confusing. There is food for the mind here, if properly sifted. Linda Gamlin's eye-catching Evolution (DK, 1993) is less ambitious though the format is similar and works better, and Alvin Silverstein's Evolution (21st Century, 1998) is far less visual, but has a smoother flow of text. In many areas of the country, the subject is still a very sticky wicket, and the topic demands the best presentation possible. This is not it.-Patricia Manning, formerly at Eastchester Public Library, NY

The Kingfisher Book of Evolution