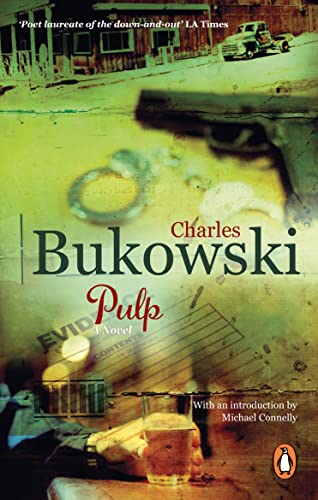 Charles Bukowski is one of America’s best-known contemporary writers of poetry and prose and, many would claim, its most influential and imitated poet. He was born in 1920 in Andernach, Germany, to an American soldier father and a German mother, and brought to the United States at the age of two. He was raised in Los Angeles and lived there for over fifty years. He died in San Pedro, California, on March 9, 1994, at the age of seventy-three, shortly after completing his last novel, Pulp.

Always the iconoclast striving for a kind of literary raunch, the internationally acclaimed Bukowski ( Ham on Rye ), who died recently, leaves us with this spoof of the hardboiled detective genre, featuring an L.A.-based private investigator named Nick Belane. As the title makes clear, this novel is dedicated to bad writing, and readers who choose to ignore this warning and plunge ahead will soon know why. A spoof should be funnier and sharper than what it is spoofing but, compared to Hammett and Chandler, Pulp is quite simply trash. In the opening pages, Belane is paid a visit by a lady in red named Lady Death, who turns out to be death itself looking for the French author Celine, who should have died a long time ago but hasn't. Belane's search for Celine leads him to some space aliens who have assumed human shape, and to some juvenile encounters with an unhappily married couple. Along the way, every woman he meets is a dish, and every man is a dumb thug. In every bar he visits, Belane is mistaken for somebody else, a mistake which invariably erupts in a murderous brawl. The prose is practically nonexistent, and you can forget character. All that's left is humor and philosophy, but Belane's humor is all bathroom and his philosophy can be summed up in the lines, "I wasn't dead yet, just in a state of rapid decay. Who wasn't?" Bukowski has taken the worst of the PI genre, stripped it bare, and added nothing but a dose of adolescent posturing. It's sad thatBukowski has left as his parting gesture a book so weak and thin.
Copyright 1994 Reed Business Information, Inc.

Book Description Ebury Publishing, United Kingdom, 2009. Paperback. Condition: New. Revised edition. Language: English. Brand new Book. Charles Bukowski's brilliant, fantastical pastiche of a detective story. Packed with wit, invention and Bukowski's trademark lowlife adventures, it is the final novel of one of the most enjoyable and influential cult writers of the last century.Nicky Belane, private detective and career alcoholic, is a troubled man. He is plagued not just by broads, booze, lack of cash and a raging ego, but also by the surreal jobs he's been hired to do. Not only has been hired to track down French classical author Celine - who's meant to be dead - but he's also supposed to find the elusive Red Sparrow - which may or may not be real. Seller Inventory # LIB9780753518175

Book Description Virgin Books. Condition: New. 2009. Paperback. Nicky Belane, private detective and career alcoholic, is a troubled man. He is plagued by broads, booze, lack of cash and a raging ego, and by the surreal jobs he's been hired to do. He has been hired to track down French classical author Celine - who's meant to be dead - and supposed to find the elusive Red Sparrow - which may or may not be real. Num Pages: 192 pages. BIC Classification: FA. Category: (G) General (US: Trade). Dimension: 197 x 130 x 14. Weight in Grams: 146. . . . . . Books ship from the US and Ireland. Seller Inventory # V9780753518175

Shipping: US$ 37.48
From United Kingdom to U.S.A.
Destination, rates & speeds