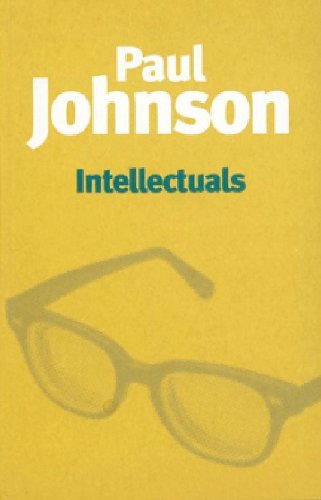 This eye-opening sketch of the minds that have shaped the modern world is an assessment of the moral and judgmental credentials of intellectuals who have advised the human race. 13 cassettes.

Conservative historian Paul Johnson wears his ideology proudly on his sleeve in this often ruthless dissection of the thinkers and artists who (in his view) have shaped modern Western culture, having replaced some 200 years ago "the old clerisy as the guides and mentors of mankind." Taking on the likes of Karl Marx, Bertrand Russell, Lillian Hellman, and Noam Chomsky in turn, Johnson examines one idol after another and finds them all to have feet of clay. In his account, for instance, Ernest Hemingway emerges as an artistic hero who labored endlessly to forge a literary style unmistakably his own, but also as a deeply flawed man whose concern for the perfect phrase did not carry over to a concern for the women who loved him. Gossipy and sharply opinionated, Johnson's essay in cultural history spares no one.

Does it really matter that Henrik Ibsen was vain and arrogant, that Jean-Paul Sartre was incontinent? In Johnson's view, it does: these all-too-human foibles disqualify them, and other thinkers, from presuming to criticize the shortcomings of society. "Beware intellectuals," he concludes (though, given the subjects of his book, it seems he means intellectuals only of the left). "Not only should they be kept well away from the levers of power, they should also be objects of particular suspicion when they seek to offer collective advice." Whether one agrees or not, Johnson's profiles are frequently amusing and illuminating, as when he suggests that the only proletarian Karl Marx ever knew in person was the poor maid who worked for him for decades and was never paid, except in room and board, for her labors. --Gregory McNamee