Items related to The Name of the Wind

Patrick Rothfuss The Name of the Wind 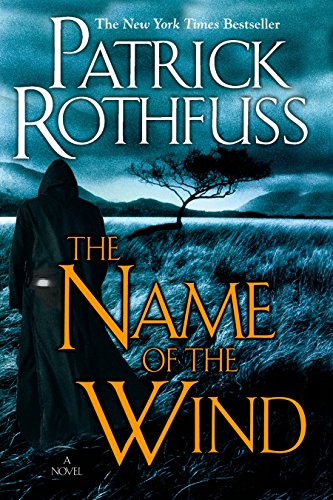 DAY ONE: THE NAME OF THE WIND

My name is Kvothe.

So begins a tale unequaled in fantasy literature—the story of a hero told in his own voice. It is a tale of sorrow, a tale of survival, a tale of one man’s search for meaning in his universe, and how that search, and the indomitable will that drove it, gave birth to a legend.

Amazon.com's Best of the Year...So Far Pick for 2007: Harry Potter fans craving a new mind-blowing series should look no further than The Name of the Wind--the first book in a trilogy about an orphan boy who becomes a legend. Full of music, magic, love, and loss, Patrick Rothfuss's vivid and engaging debut fantasy knocked our socks off. --Daphne Durham

Q: Were you always a fan of fantasy novels?
A: Always. My first non-picture books were the Narnia Chronicles. After that my mom gave me Ihe Hobbit and Dragonriders. I grew up reading about every fantasy and sci-fi book I could find. I used to go to the local bookstore and look at the paperbacks on the shelf. I read non-fantasy stuff too, of course. But fantasy is where my heart lies. Wait... Should that be "where my heart lays?" I always screw that up.

Q: Who are some of your favorite authors? Favorite books?
A: Hmmm.... How about I post that up as a list?

Q: What are you reading now?
A: Right now I'm reading Capacity, by Tony Balantyne. He was nominated for the Philip K Dick award this last year. I heard him read a piece of the first novel, Recursion, out at Norwescon. I picked it up and got pulled right in. Capacity is the second book in the series. Good writing and cool ideas. Everything I've like best.

Q: How did Kvothe's story come to you? Did you always plan on a trilogy?
A: This story started with Kvothe's character. I knew it was going to be about him from the very beginning. In some ways it's the simplest story possible: it's the story of a man's life. It's the myth of the Hero seen from backstage. It's about the exploration and revelation of a world, but it's also about Kvothe's desire to uncover the truth hidden underneath the stories in his world. The story is a lot of things, I guess. As you can tell, I'm not very good at describing it. I always tell people, "If I could sum it up in 50 words, I wouldn't have needed to write a whole novel about it." I didn't plan it as a trilogy though. I just wrote it and it got to be so long that it had to be broken up into pieces. There were three natural breaking points in the story.... Hence the Trilogy.

Q: What is next for our hero?
A: Hmm..... I don't really believe in spoilers. But I think it's safe to say that Kvothe grows up a little in the second book. He learns more about magic. He learns how to fight, gets tangled up in some court politics, and starts to figure unravel some of the mysteries of romance and relationships, which is really just magic of a different kind, in a way.

My name is Kvothe, pronounced nearly the same as "quothe." Names are important as they tell you a great deal about a person. I've had more names than anyone has a right to.

The Adem call me Maedre. Which, depending on how it's spoken, can mean The Flame, The Thunder, or The Broken Tree.

"The Flame" is obvious if you've ever seen me. I have red hair, bright. If I had been born a couple of hundred years ago I would probably have been burned as a demon. I keep it short but it's unruly. When left to its own devices, it sticks up and makes me look as if I have been set afire.

"The Thunder" I attribute to a strong baritone and a great deal of stage training at an early age.

I've never thought of "The Broken Tree" as very significant. Although in retrospect, I suppose it could be considered at least partially prophetic.

But I was brought up as Kvothe. My father once told me it meant "to know."

I have, of course, been called many other things. Most of them uncouth, although very few were unearned.

So begins the tale of Kvothe-from his childhood in a troupe of traveling players, to years spent as a near-feral orphan in a crime-riddled city, to his daringly brazen yet successful bid to enter a difficult and dangerous school of magic. In these pages you will come to know Kvothe as a notorious magician, an accomplished thief, a masterful musician, and an infamous assassin. But The Name of the Wind is so much more-for the story it tells reveals the truth behind Kvothe's legend.

The Name of the Wind Hardcover

The Name of the Wind (the Kingkiller Chronicle: Day One) (Hardback or Cased Book)

The Name of the Wind (The Kingkiller Chronicle: Day One) Format: Hardcover