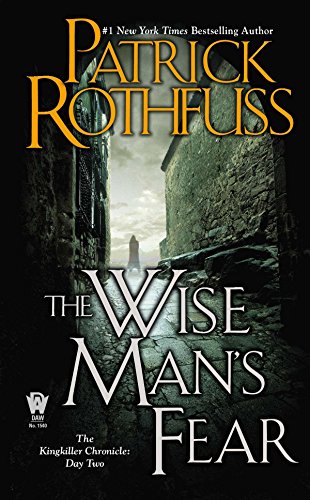 “There are three things all wise men fear: the sea in storm, a night with no moon, and the anger of a gentle man.”

My name is Kvothe. You may have heard of me.

So begins a tale told from his own point of view—a story unequaled in fantasy literature. Now in The Wise Man’s Fear, Day Two of The Kingkiller Chronicle, Kvothe takes his first steps on the path of the hero and learns how difficult life can be when a man becomes a legend in his own time.

Amazon Best Books of the Month, March 2011: The Wise Man's Fear continues the mesmerizing slow reveal of the story of Kvothe the Bloodless, an orphaned actor who became a fearsome hero before banishing himself to a tiny town in the middle of Newarre. The readers of Patrick Rothfuss's outstanding first book, The Name of the Wind, which has gathered both a cult following and a wide readership in the four years since it came out, will remember that Kvothe promised to tell his tale of wonder and woe to Chronicler, the king's scribe, in three days. The Wise Man's Fear makes up day two, and uncovers enough to satisfy readers and make them desperate for the full tale, from Kvothe's rapidly escalating feud with Ambrose to the shockingly brutal events that mark his transformation into a true warrior, and to his encounters with Felurian and the Adem. Rothfuss remains a remarkably adept and inventive storyteller, and Kvothe's is a riveting tale about a boy who becomes a man who becomes a hero and a killer, spinning his own mythology out of the ether until he traps himself within it. Drop everything and read these books. --Daphne Durham

Sanderson: Hey there, Pat. Nice talking with you again.

Rothfuss: Thanks for being willing to do this. I know you're insanely busy these days.

Okay. Let me just jump right in here with a question. How long was Way of Kings? I heard a rumor that the ARC I read was 400,000 words long. It didn't really feel like it...

Sanderson: Let me see. I will open it right now and word count it, so you have an exact number. It’s 386,470 words, though the version you read was an advance manuscript, before I did my final 10% tightening draft, which was 423,557 words.

I didn’t really want it to be that long. At that length we’re running into problems with foreign publishers having to split it and all sorts of issues with making the paperback have enough space. I didn’t set out to write a thousand-page, 400,000-word book. It’s just what the novel demanded.

Rothfuss: Wise Man's Fear ended up being 395,000 words. And that's despite the fact that I've been pruning it back at every opportunity for more than a year. I'd spend weeks trimming superfluous words and phrases, extra lines of dialogue, slightly redundant description until the book was 12,000 words shorter.

Then a month later I'd realize I needed to add a scene to bring better resolution to a plot line. Then I'd add a couple paragraphs to clarify some some character interaction. Then I'd expand an action scene to improve tension. Suddenly the book's 8,000 words longer again.

It’s very rare that I’m able to cut entire scenes. If I can cut entire scenes that means there’s something fundamentally not working with the sequence and I usually end up tossing the whole thing and rewriting it. But trimming, or pruning as you described it, works very well with my fiction.

I can usually cut fifteen percent off just by nurturing the text, pruning it, looking for the extraneous words and phrases. But I wonder if in doing that there’s a tendency to compensate. There’s a concept in dieting that if someone starts working out really hard, they start to say, “Well, that means I can now eat more,” and you’ll find people compensating for the extra calorie loss by eating more because they feel they can. I wonder if we do that with our fiction. I mean, I will get done with this big long trim and I’ll say, “Great, now I have the space to do this extra thing that I really think the story needs,” and then the story ends up going back to just as long.

Though at least in my case I can blame my editor too. He’s very good with helping me with line edits, but where we perhaps fuel each other in the wrong way is that he’ll say, “Ooh, it’d be awesome if you add this,” or “This scene needs this,” or “Can you explain this?” And I say, “Yes! I can explain that. I’d love to!” And then of course the book gets longer and then we both have to go to Tom Doherty with our eyes downward saying, “Um, the book is really long again, Tom. Sorry.”

I have a question for you, then. Did you always intend the Kingkiller Chronicle to be three days split across three books? Or did you start writing it as one book and then split it? What’s the real story behind that?

Rothfuss: Assuming I had any sort of plan at the beginning is a big mistake. I just started writing. I didn't have a plan. I didn't know what I was doing.

I can't say why I picked three books except that three is a good number. It's sort of the classic number. And while the story is working well in this format, part of me wishes I'd broken it into smaller chunks. This second book has so many plotlines. If I'd written this trilogy as say, 10 books, each one would be much shorter and self contained. More like the Dresden Files.

That's pointless musing though. I'm sure if I'd written smaller volumes right now I'd be thinking, "Oh! if only I'd written these as longer books I could play more with interwoven plot lines..."

Read the full interview About the Author:

Patrick Rothfuss is the bestselling author of The Kingkiller Chronicle. His first novel, The Name of the Wind, won the Quill Award and was a Publishers Weekly Best Book of the Year. Its sequel, The Wise Man’s Fear, debuted at #1 on The New York Times bestseller chart and won the David Gemmell Legend Award. His novels have appeared on NPR’s Top 100 Science Fiction/Fantasy Books list and Locus’ Best 21st Century Fantasy Novels list. Pat lives in Wisconsin, where he brews mead, builds box forts with his children, and runs Worldbuilders, a book-centered charity that has raised more than six million dollars for Heifer International. He can be found at patrickrothfuss.com and on Twitter at @patrickrothfuss.