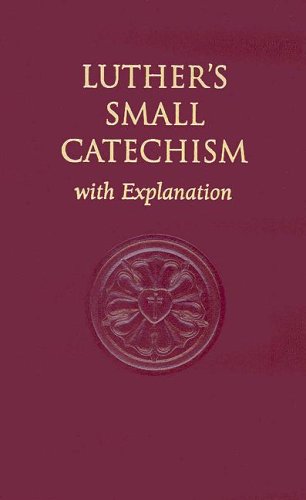 This version of Luther's Small Catechism features scripture references taken from the New International Version (NIV) of the Bible.

Written by Martin Luther in 1529 in question and answer format, the Small Catechism explores the Six Chief Parts of Christian Doctrine: the Ten Commandments, the Apostles Creed, the Lord's Prayer, the Sacrament of Holy Baptism, Confession, and the Sacrament of the Altar. Also included are daily prayers, a table of duties for Christians in their various callings in life, and a guide for Christians to use as they prepare to receive Holy Communion. Luther intended the catechism to be a prayer book for individuals and families and a powerful tool for the Christian life because it provides a brief, clear summary of God s Word on the essentials of the Christian faith.

Additional reference material includes: books of the Bible; the creeds and confessions; an explanation of Luther's seal; an explanation of the church year; fifty terms relating to worship and God's House; a brief history of the time between the testaments; an outline of God's salvation plan; and fifty Christian symbols and their meanings.

The explanation contained in this text was not written by Martin Luther. An explanation designed to help students understand and apply Luther's Small Catechism has accompanied editions of the Catechism since the early days of Lutheranism. The explanation is based upon and largely includes the work of Johann Konrad Dietrich, Carl Ferdinand Wilhelm Walther, Heinrich Christian Schwan, and the committee that prepared the synodical catechism of 1943.

Martin Luther (1483, 1546) was a German monk, a theologian and church reformer, he is considered to be the founder of Protestantism. Luther was a professor of Bible at the University of Wittenberg when he posted his famous 95 Theses (1517). In addition to writing many books, Luther translated the Bible into German. Luther believed that salvation was only by faith in Jesus, unmediated by the church. He challenged papal authority by emphasing the Bible as the only source of religious authority and believed the church to be a priesthood of all believers.These ideas helped to inspire the Protestant Reformation and changed the course of Western civilization. He married Katharina von Bora thus initiating the practice of clerical marriage within Protestantism.- Publisher.

Book Description Concordia Publishing, 2005. Condition: New. This is a brand new book! Fast Shipping - Safe and Secure Mailer - Our goal is to deliver a better item than what you are hoping for! If not we will make it right!. Seller Inventory # 1XGBB90003G0_ns