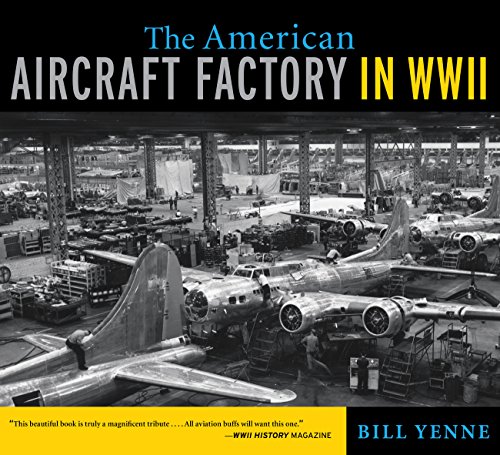 Few industrial phenomena have been as dramatic as the United States’ mid-20th-century shift from peacetime to wartime production. The American Aircraft Factory in World War II documents the production of legendary warbirds by companies like Boeing, North American, Curtiss, Consolidated, Douglas, Grumman, and Lockheed. It was a production unmatched by any other country and a crucial part of why the allies won the war.

Author Bill Yenne considers the prewar governmental acts that got the plants rolling, as well as the gender shift that occurred as women entered the work force like never before. He also describes the construction of megafactories like Willow Run, factory design considerations, and the postwar conversion back to peacetime production. Illustrated with 175 period photographs—including 50 rare color photos never before seen in print.

On the eve of World War II, most American aircraft were hand-built using methods that the nation’s automobile factories had abandoned a generation before. Within a few years, U.S. aircraft factories would be at the epicenter of the largest industry in the world, turning out more than 304,000 warplanes between 1939 and 1945. In fact, during World War II America’s aircraft industry rocketed from fifth in the world to the position of global leader, producing twice as many aircraft as the United Kingdom or the Soviet Union, and more than one and a half times as many aircraft as the three major Axis powers combined.While this astounding increase in production is difficult to comprehend, author and historian Bill Yenne examines the circumstances and policies behind these statistics while providing a look inside American aircraft factories throughout this extraordinary increasing output. Illustrated throughout with dramatic images from facilities across the country including rarely published and beautifully preserved color photography The American Aircraft Factory in World War II sets the stage by describing the genesis of the industry and its development immediately prior to 1939. Readers witness not just America’s great aviation pioneers and the companies they forged, but the real heroes: the men and, for the first time, women on the factory floors who led the American aircraft industry’s metamorphosis from a relic of a fading era to a world leader.

In 1939, a total of 921 military aircraft were built in the United States. A mere five years later the industry reached a peak annual production of 96,318. The United States had become the largest producer of aircraft that the world has ever seen, or will almost certainly ever see again. Behind these stunning figures are a slew of remarkable technologies and unprecedented policies, not to mention the thousands of men and women who put a face on the industrial complex. For the first time all of these elements and more are gathered on the pages of this exceptional book examining the meteoric rise of the American aircraft factory. Illustrated throughout with dramatic imagery from facilities across the country including rarely published and beautifully preserved color photography The American Aircraft Factory in World War II captures an extraordinary U.S. industry at a crucial juncture in the nation’s history.