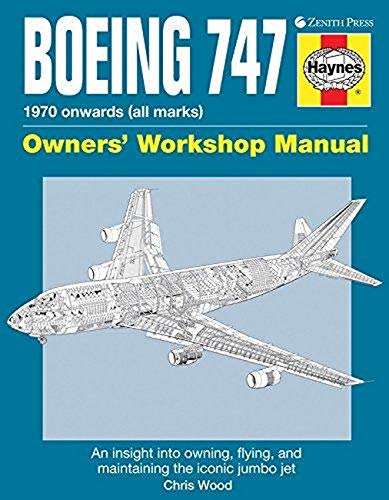 When the Boeing 747 first flew commercially in 1970, it ushered in a new era of affordable air travel. Often referred to by the nickname “Jumbo Jet,” the 747 was the world’s first wide-body commercial airliner, and its advent has proved to be one of the major milestones in aviation history. The centerpiece of this Haynes Manual is the 747-400, which is the most numerous version. As well as being the bestselling model in the 747 family, there are more 400s currently in service than any other model of this mighty jumbo.

The advent of the Boeing 747, the world’s first wide-body commercial airliner, was one of the most significant milestones in aviation history. When the first 747 touched down at Heathrow Airport from New York on 22 January 1970, it heralded the dawn of a popular revolution in long-haul air travel.

Bigger than any passenger aircraft that had come before it, the wide-body 747 “Jumbo Jet” enabled airlines worldwide to slash ticket costs, which meant that affordable travel to faraway destinations finally came within reach of the masses.

To keep the 747 at the forefront of commercial aviation, Boeing continued to develop the basic design, progressively improving the standard passenger 747 in addition to creating extended-range, high-density, combi and dedicated freighter versions, and a whole range of specialist adaptations. In 2005, a major redesign of the 747 (the 747-8) was launched that draws on technology from Boeing’s 787 model, which means the final chapter in the 747 story has yet to be written.

Boeing 747 pilot and author Chris Wood sets his gaze on the 747-400 version and lifts the inspection panels on this most numerous of all 747 models. He describes the anatomy of this huge aircraft, how it is flown and operated, and how the engineers keep Boeing’s best-selling version of the 747 airworthy.

About the Author: Chris Wood is a Boeing 747 captain with Virgin Atlantic. He has more than 15,000 hours flying time, 10,000 of which are on 747s. He is a regular contributor to the aviation press, including Airliner World and Today’s Pilot. He lives in East Sussex, England.