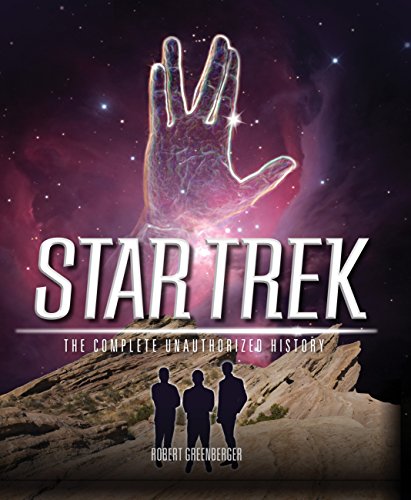 This is the first book to combine an authoritative history of the Star Trek franchise—including all six television series and eleven feature films—with anecdotes about the show from those who helped shape it from the outside in: the fans. Star Trek expert Robert Greenberger covers everything from show creator Gene Roddenberry’s initial plans for a series combining science-fiction and Western elements, the premiere of the original series in 1966, its cancellation, the franchise’s return in an animated series, and its subsequent history on television and film, up to expectations for the 2013 J.J. Abrams film. Along the way, Greenberger analyzes Star Trek’s unique cultural impact and tremendous cult following, including the famous (and first ever) save-the-show mail campaign. But this isn't a sugarcoated history; this book chronicles the missteps as well as the achievements of Roddenberry and others behind the franchise.

Approximately two dozen sidebars provide personal experiences of dedicated Trekkies who influenced or became a part of the franchise. Star Trek fandom is unparalleled in the effects it has had on the franchise itself. The book is illustrated with a large collection of photographs of memorabilia, many of which have never been seen before in print.

From the Back Cover: Following a rocky start as a 1960s TV series canceled after just three seasons, Star Trek experienced multiple reinventions driven by a growing legion of fans—including author Robert Greenberger, who attended the very first convention. From syndicated reruns to a Saturday morning cartoon to a leap to the big screen and several new series and movies featuring an ever-expanding cast, Star Trek became a franchise juggernaut. Star Trek: The Complete Unauthorized History is a loving and candid review of the fifty-year franchise, a story as full of plot twists as its hundreds of episodes and films. Greenberger, author of over a dozen Trek novels and short stories, tells this fascinating tale as only an expert and longtime fan could. He examines the behind-the-scenes saga—from the struggles of Trek’s enthusiastic creator, Gene Roddenberry, to realize his vision on the small screen, to the franchise’s latest cinematic reinvention from J. J. Abrams—as well as the devoted fans who support its continuing growth. Featuring sidebars by Star Trek authorities such as Michael and Denise Okuda as well as contributions from notable fans including astronauts Thomas D. Jones and Mario Runco Jr. (who logged over seventy-five days in space between them), Star Trek: The Complete Unauthorized History captures the long and bumpy road to becoming an international, groundbreaking phenomenon. Greenberger explores all the ways Star Trek has earned its enduring place in pop culture, evidenced by myriad comic books, audio dramas, software, board games, short stories, novels, Saturday Night Live sketches, elaborate fan productions, and well-known catch phrases. More than two hundred photos of conventions, T-shirts, buttons, toys, books, and other memorabilia prove—as if there were any logical doubt—that Star Trek lives! About the Author: Robert Greenberger (Fairfield, CT) has long worked in the pop culture field including tenures at Starlog Press, DC Comics, Marvel Comics, and Weekly World News. His most recent works include The Essential Batman Encyclopedia, Spider-Man Vault (co-written with Peter David) and Stan Lee’s How to Write Comics (co-written with Stan Lee). He has over a dozen Star Trek books to his credit in addition to editing the comic book adaptations for eight years.