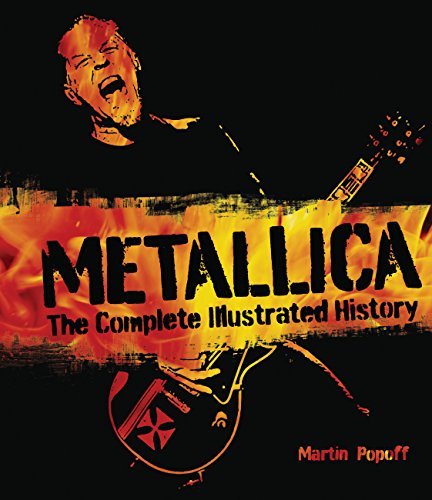 Formed in Los Angeles in 1981, Metallica has become one of the bestselling bands in rock history. In this, the first complete illustrated treatment of Metallica, Martin Popoff presents the group’s entire history and provides a full discography, while a roster of respected music journalists including Richard Bienstock, Daniel Bukszpan, Neil Daniels, Andrew Earles, Gary Graff, Jaan Uhelszki, and Mick Wall dissects their releases. The stories behind the band’s formation, tragedies, triumphs, recordings, personnel changes, and tours are complemented by more than 300 images, including live performance and candid off-stage photographs, as well as such memorabilia as gig posters, period print ads, concert tees, backstage passes, ticket stubs, and more. The result is an authoritative and visually stunning tribute to one of rock’s most compelling bands. Martin Popoff has been described as “the world’s most famous heavy metal journalist.” He has penned 40 books, including Voyageur Press’ Rush: The Illustrated History, and is a frequent contributor to documentaries and TV series, including Rush: Beyond the Lighted Stage and VH1’s Metal Evolution. He lives in Toronto with his wife and son.

At approximately 7,900 (with over 7,000 appearing in his books), Martin Popoff has unofficially written more record reviews than anybody in the history of music writing across all genres. Additionally, Martin has penned 57 books on hard rock, heavy metal, classic rock, and record collecting, including 2004’s Contents Under Pressure: 30 Years of Rush at Home and Away, Rush: The Illustrated History, and Rush: Album by Album. He was Editor In Chief of the now retired Brave Words & Bloody Knuckles, Canada’s foremost heavy metal publication in print for 14 years, and has also contributed to Revolver,Guitar World, Goldmine, Record Collector, bravewords.com, lollipop.com and hardradio.com. Martin has been a regular contractor to Banger Films, having worked on the award-wining documentary Rush: Beyond The Lighted Stage, the 11-episode Metal Evolution, and the 10-episode Rock Icons, both for VH1 Classic. Martin currently resides in Toronto and can be reached through martinp@inforamp.net or www.martinpopoff.com.

Book Description Paperback. Condition: Very Good. The book has been read, but is in excellent condition. Pages are intact and not marred by notes or highlighting. The spine remains undamaged. Seller Inventory # GOR010365415

Shipping: US$ 7.14
From United Kingdom to U.S.A.
Destination, rates & speeds

Book Description Condition: Good. A+ Customer service! Satisfaction Guaranteed! Book is in Used-Good condition. Pages and cover are clean and intact. Used items may not include supplementary materials such as CDs or access codes. May show signs of minor shelf wear and contain limited notes and highlighting. Seller Inventory # 0760344825-2-4

Book Description Hardcover. Condition: Used; Good. **Simply Brit** Shipped with Premium postal service within 24 hours from the UK with impressive delivery time. We have dispatched from our book depository; items of good condition to over ten million satisfied customers worldwide. We are committed to providing you with reliable and efficient service at all times. Seller Inventory # 2598920

Shipping: US$ 9.34
From United Kingdom to U.S.A.
Destination, rates & speeds

Book Description Hardcover. Condition: Very Good. Item is in very good condition. If supplemental codes/CDs for textbooks are required please contact us prior to purchasing as they may be missing. Photos are stock pictures and not of the actual item. Seller Inventory # DS-0760344825-2

Book Description Hardcover. Condition: Very Good. One corner has a tear on it, but rest of book is in very good condition Shipped from the UK within 2 business days of order being placed. Seller Inventory # mon0000169856

Book Description Hardcover. Condition: Fine. New and urnead, however there is some light shelf wear including light bump to corner Shipped from the UK within 2 business days of order being placed. Seller Inventory # mon0000127344