Items related to The Book of Five Rings

The Book of Five Rings 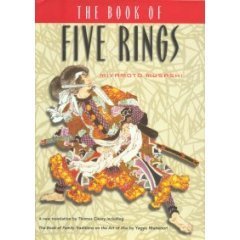 The Book of Five Rings By Musashi Miyamoto

To learn a Japanese martial art is to learn Zen, and although you can't do so simply by reading a book, it sure does help--especially if that book is The Book of Five Rings. One of Japan's great samurai sword masters penned in decisive, unfaltering terms this certain path to victory, and like Sun Tzu's The Art of War it is applicable not only on the battlefield but also in all forms of competition. Always observant, creating confusion, striking at vulnerabilities--these are some of the basic principles. Going deeper, we find suki, the interval of vulnerability, of indecisiveness, of rest, the briefest but most vital moment to strike. In succinct detail, Miyamoto records ideal postures, blows, and psychological tactics to put the enemy off guard and open the way for attack. Most important of all is Miyamoto's concept of rhythm, how all things are in harmony, and that by working with the rhythm of a situation we can turn it to our advantage with little effort. But like Zen, this requires one task above all else, putting the book down and going out to practice. --Brian Bruya

Miyamoto Musashi, born Shinmen Takezo, was the author of The Book of Five Rings, an insightful text on the subtle art of confrontation and victory. Musashi was a famed swordsman who claimed to have defeated his first opponent at the age of thirteen. He wrote that he engaged in sixty duels without suffering a single defeat, and was noted for his skill at handling two swords at once.

1. The Book of Five Rings

2. The Book of Five Rings