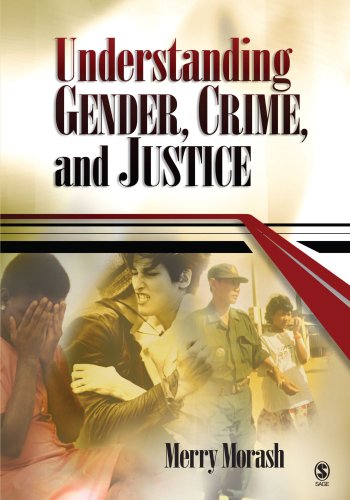 In the last three decades, there has been an explosion of theory and related research relevant to gender, crime, and justice. Author Merry Morash, a well-known feminist scholar in the field of criminal justice, acquaints readers with key breakthroughs in criminological conceptualization and theories to explain the interplay between gender and both crime and justice. Understanding Gender, Crime, and Justice pays special attention to race, ethnicity, and immigrant groups, and provides a unique comparative perspective.

Merry Morash is Professor at the Michigan State University School of Criminal Justice, where she served as director from 1991 to 2001.  She also is founder, Director and faculty instructor of the Michigan Victim Assistance Academy, which provides education for individuals who work with crime victims, and the Director of the  Michigan Regional Community Policing Institute, and is Secretary of the Michigan DARE Advisory Board.  Her primary research emphasis is on gender and crime, and current research is on domestic violence among Asian Americans and gender responsive programming for women offenders.  She also has done extensive research on women in policing, and is currently engaged in research to follow up on women who participated in a study nearly a decade ago.  She has recently served on the Domestic Violence Homicide Prevention Task Force, which was chaired by Michigan’s Lt. Governor, and on the Advisory Board for the Michigan Judicial Institute bench book to assist judges in their work with crime victims.  Dr. Morash is a coauthor of the textbooks, Juvenile Delinquency:  Concepts and Control and Co-Editor of  The Move to Community Policing: Making Change Happen, and has written and published extensively on women as offenders, police, and crime victims.  Additional publications focus on assessment and implementation of criminal justice policy and juvenile delinquency programming and causation.