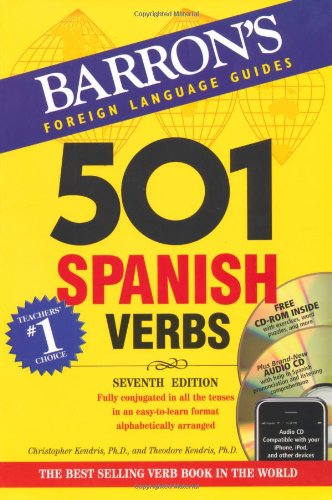 The world's bestselling Spanish verbs reference book has just gotten better! The authors focus directly on a command of Spanish verbs--and fluency in Spanish starts with knowledge of verbs. This new seventh edition shows students and travelers exactly how to use the 501 most common and useful Spanish verbs in all 15 tenses and moods. Each verb is alphabetically listed in easy-to-follow chart form, one verb per page with its English translation. Enclosed with the book are two discs, a CD-ROM with language-learning aids, and an audio CD that reviews the formation and usage of Spanish verb forms.

(back cover)
Learning Spanish is twice as easy with
this brand-new 3-in-1 combination!

Dr. Christopher Kendris, an accomplished linguist, has worked as an interpreter and translator for the U.S. State Department at the American Embassy in Paris. He holds a Ph.D. from Northwestern University in Evanston, Illinois, and diplomas with " Mention Honorable " at the Universite de Paris (en Sorbonne), and at the Institut de Photetique, Paris. He is former Chairman of the Department of Foreign Languages and Supervisor of 16 foreign language teachers at Farmingdale High School, Farmingdale, NY, and has taught foreign language courses at various colleges and universities.

Dr. Theodore Kendris earned his Ph.D. at Universite Laval, Quebec City. He has taught in the Department of English and Foreign Languages at the University of St. Francis in Joliet, Illinois as well as at the Hazleton Campus of Penn State University. Dr. Kendris is the author of " Ingles completo: Repaso integral de gramatica inglesa para hispanohablantes, " published by Barron's. He is coauthor of " Spanish Fundamentals and Spanish Verb Conjugations, " also published by Barron's.