Items related to The Sea Thy Mistress (The Edda of Burdens)

Bear, Elizabeth The Sea Thy Mistress (The Edda of Burdens)

The Sea Thy Mistress (The Edda of Burdens) 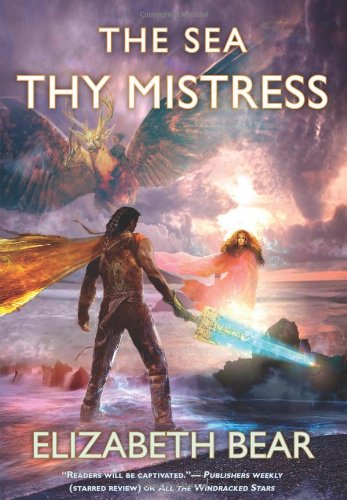 This direct sequel to Elizabeth Bear’s highly acclaimed All the Windwracked Stars picks up the story some fifty years after Muire went into the sea and became the new Bearer of Burdens.

Beautiful Cathoair, now an immortal warrior angel, has been called back to the city of Eiledon to raise his son--Muire’s son as well, cast up on shore as an infant. It is seemingly a quiet life. But deadly danger approaches...the evil goddess Heythe, who engineered the death of Valdyrgard, has travelled forward in time on her rainbow steed. She came expecting to gloat over a dead world, the proof of her revenge, but instead she finds a Rekindled land, renewed by Muire’s sacrifice.

She will have her revenge by forcing this new Bearer of Burdens to violate her oaths and break her bounds and thus bring about the true and final end of Valdyrgard. She will do it by tormenting both Cathoair and his son Cathmar. But Mingan, the gray wolf, sees his old enemy Heythe’s return. He will not allow it to happen again.

ELIZABETH BEAR is a two-time Hugo Award winning writer. She is the author of fourteen previous novels, including the first two books of The Edda of Burdens: All the Windwracked Stars and By the Mountain Bound. She lives in Connecticut.

1. The Sea Thy Mistress (The Edda of Burdens)

2. THE SEA THY MISTRESS (THE EDDA O

3. The Sea Thy Mistress