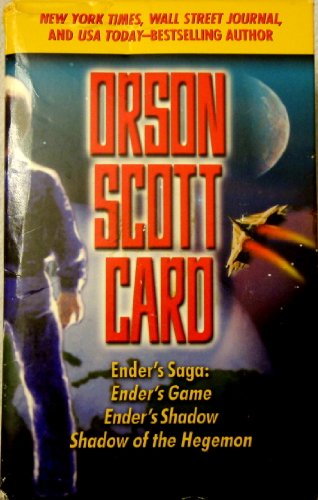 Ender's Game
Winner of the Hugo and Nebula Awards

In order to develop a secure defense against a hostile alien race's next attack, government agencies breed child geniuses and train them as soldiers. A brilliant young boy, Andrew "Ender" Wiggin lives with his kind but distant parents, his sadistic brother Peter, and the person he loves more than anyone else, his sister Valentine. Peter and Valentine were candidates for the soldier-training program but didn't make the cut—young Ender is the Wiggin drafted to the orbiting Battle School for rigorous military training.

Ender's skills make him a leader in school and respected in the Battle Room, where children play at mock battles in zero gravity. Yet growing up in an artificial community of young soldiers Ender suffers greatly from isolation, rivalry from his peers, pressure from the adult teachers, and an unsettling fear of the alien invaders. His psychological battles include loneliness, fear that he is becoming like the cruel brother he remembers, and fanning the flames of devotion to his beloved sister.

Is Ender the general Earth needs? But Ender is not the only result of the genetic experiments. The war with the Buggers has been raging for a hundred years, and the quest for the perfect general has been underway for almost as long. Ender's two older siblings are every bit as unusual as he is, but in very different ways. Between the three of them lie the abilities to remake a world. If, that is, the world survives.

Ender's Shadow
Orson Scott Card brings us back to the very beginning of his brilliant Ender Quartet, with a novel that allows us to reenter that world anew.

With all the power of his original creation, Card has created a parallel volume to Ender's Game, a book that expands and compliments the first, enhancing its power, illuminating its events and its powerful conclusion.

The human race is at War with the "Buggers", an insect-like alien race. The first battles went badly, and now as Earth prepares to defend itself against the imminent threat of total destruction at the hands of an inscrutable alien enemy, all focus is on the development and training of military geniuses who can fight such a war, and win.

The long distances of interstellar space have given hope to the defenders of Earth--they have time to train these future commanders up from childhood, forging then into an irresistible force in the high orbital facility called the Battle School.

Andrew "Ender" Wiggin was not the only child in the Battle School; he was just the best of the best. In this new book, card tells the story of another of those precocious generals, the one they called Bean--the one who became Ender's right hand, part of his team, in the final battle against the Buggers.

Bean's past was a battle just to survive. He first appeared on the streets of Rotterdam, a tiny child with a mind leagues beyond anyone else's. He knew he could not survive through strength; he used his tactical genius to gain acceptance into a children's gang, and then to help make that gang a template for success for all the others. He civilized them, and lived to grow older.

Bean's desperate struggle to live, and his success, brought him to the attention of the Battle School's recruiters, those people scouring the planet for leaders, tacticians, and generals to save Earth from the threat of alien invasion. Bean was sent into orbit, to the Battle School. And there he met Ender....

Shadow of the Hegemon
The War is over, won by Ender Wiggin and his team of brilliant child-warriors. The enemy is destroyed, the human race is saved. Ender himself refuses to return to the planet, but his crew has gone home to their families, scattered across the globe. The battle school is no more.

But with the external threat gone, the Earth has become a battlefield once more. The children of the Battle School are more than heroes; they are potential weapons that can bring power to the countries that control them. One by one, all of Ender's Dragon Army are kidnapped. Only Bean escapes; and he turns for help to Ender's brother Peter.

Peter Wiggin, Ender's older brother, has already been manipulating the politics of Earth from behind the scenes. With Bean's help, he will eventually rule the world.

Born in Richland, Washington in 1951, Orson Scott Card grew up in California, Arizona, and Utah. He lived in Brazil for two years as an unpaid missionary for the Mormon Church and received degrees from Brigham Young University (1975) and the University of Utah (1981). The author of numerous books, Card was the first writer to receive both the Hugo and Nebula awards for best novel two years in a row, first for Ender's Game and then for the sequel Speaker for the Dead. He lives with his wife and children in North Carolina.