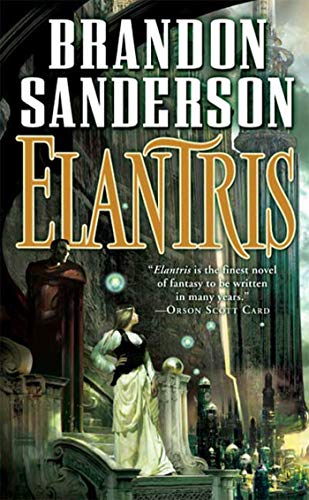 In 2005, Brandon Sanderson debuted with Elantris, an epic fantasy unlike any other then on the market. To celebrate its tenth anniversary, Tor is reissuing Elantris in a special edition, a fresh chance to introduce it to the myriad readers who have since become Sanderson fans.

This new edition begins with a preface by author Dan Wells, the first person to read the completed novel, and a new afterword by Sanderson explaining how he came to write the book and its place in the Cosmere, the unified universe of all his Tor novels.

Also included is an expanded version of the "Ars Arcanum" appendix, with more of the technical details of the book's magic that fans can never get enough of.

Elantris was truly a milestone both for Sanderson and for the genre of epic fantasy. It deserves this special treatment, something Tor has done only once before, with Orson Scott Card's Ender's Game. Sanderson fans old and new will be excited to discover it.

ELANTRIS WAS THE CITY OF THE GODS
What power could have cursed it?

in 2005, Brandon Sanderson, fantasy's new master storyteller, carried readers away to "a truly original world of magic and intrigue, with the rigor of the best science fiction [and] magnificent characters [that] make this novel unforgettable" (Orson Scott Card). Elantris delightfully proved that a great complete fantasy story can still be told in a single volume of action, intrigue, wonder, and countless surprises. As Locus said, "You're swiftly forget you're reading a first novel...this is a heck of a debut!"

"Brandon Sanderson is the real thing--an exciting storyteller with a unique and powerful vision. Elantris is one of the finest debuts I've seen in years." --David Farland