Items related to Too Like the Lightning: Book One of Terra Ignota (Terra...

Palmer, Ada Too Like the Lightning: Book One of Terra Ignota (Terra Ignota, 1) 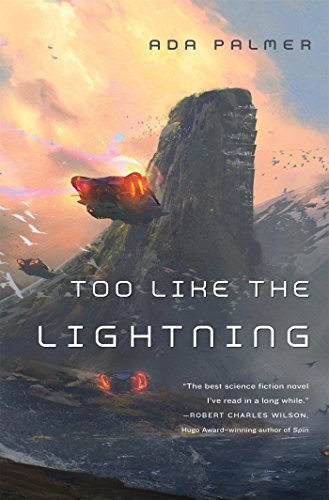 From the winner of the 2017 John W. Campbell Award for Best New Writer, Ada Palmer's 2017 Compton Crook Award-winning political science fiction, Too Like the Lightning, ventures into a human future of extraordinary originality

Mycroft Canner is a convict. For his crimes he is required, as is the custom of the 25th century, to wander the world being as useful as he can to all he meets. Carlyle Foster is a sensayer--a spiritual counselor in a world that has outlawed the public practice of religion, but which also knows that the inner lives of humans cannot be wished away.

The world into which Mycroft and Carlyle have been born is as strange to our 21st-century eyes as ours would be to a native of the 1500s. It is a hard-won utopia built on technologically-generated abundance, and also on complex and mandatory systems of labelling all public writing and speech. What seem to us normal gender distinctions are now distinctly taboo in most social situations. And most of the world's population is affiliated with globe-girdling clans of the like-minded, whose endless economic and cultural competition is carefully managed by central planners of inestimable subtlety. To us it seems like a mad combination of heaven and hell. To them, it seems like normal life.

And in this world, Mycroft and Carlyle have stumbled on the wild card that may destabilize the system: the boy Bridger, who can effortlessly make his wishes come true. Who can, it would seem, bring inanimate objects to life...

ADA PALMER is a professor in the history department of the University of Chicago, specializing in Renaissance history and the history of ideas. Her first nonfiction book, Reading Lucretius in the Renaissance, was published in 2014 by Harvard University Press. She is also a composer of folk and Renaissance-tinged a capella music, most of which she performs with the group Sassafrass. Her personal site is at adapalmer.com, and she writes about history for a popular audience at exurbe.com and about SF and fantasy-related matters at Tor.com.

The third book of her Terra Ignota series, The Will to Battle, will be released December 2017.

Praise for Book 1 of Terra Ignota, Too Like the Lightning

“More intricate, more plausible, more significant than any debut I can recall...If you read a debut novel this year, make it Too Like the Lightning.” ―Cory Doctorow

“Astonishingly dense, accomplished and well-realized, with a future that feels real in both its strangeness and its familiarity.”―RT Book Reviews (Top Pick)

“A breathless and devious intellectual page-turner, Seven Surrenders veers expertly between love, murder, mayhem, parenthood, theology, and high politics. I haven't had this much fun with a book in a long time.” ―Max Gladstone

“A breathless and devious intellectual page-turner, Seven Surrenders veers expertly between love, murder, mayhem, parenthood, theology, and high politics. I haven't had this much fun with a book in a long time.” ―Max Gladstone

"Palmer crafts one of the most compelling narrative voices around in describing this impossible, fascinating and plausibly contradictory world." ―RT Book Reviews, 4-1/2 stars

“Devastatingly accomplished...An arch and playful narrative that combines the conscious irreverence of the best of 18th-century philosophy with the high-octane heat of an epic science fiction thriller.” ―Liz Bourke

“Palmer proves that the boundaries of science fiction can be pushed and the history and the future can be married together.” ―Publishers Weekly

Praise for Book 3 of Terra Ignota, The Will to Battle

"It is increasingly clear that we are in the hands of a new master of the genre....There's a resonance and richness to the Terra Ignota series that is like almost nothing else being written today." ―RT Book Reviews, 5 stars

"One appreciates the wry humor and the ingenious depth of her worldbuilding. The interplay between reader and narrator is especially enjoyable." ―Publishers Weekly

"Any reader who has ever thrilled to the intricate machinations of the Dune books, or the Instrumentality tales of Cordwainer Smith, or the sensual, tactile, lived-in futures of Delany or M. John Harrison... will enjoy the mental and emotional workout offered by Palmer’s challenging Terra Ignota cycle." ―Locus

"This series is one the best things that has happened to science fiction in the 21st Century and I can’t hardly wait to see where Ada Palmer is going to take us with Perhaps the Stars." ―SffWorld

Too Like the Lightning: Book One of Terra Ignota

Shipping: US$ 22.90
From United Kingdom to U.S.A.
Destination, rates & speeds