Items related to Gulag: A History 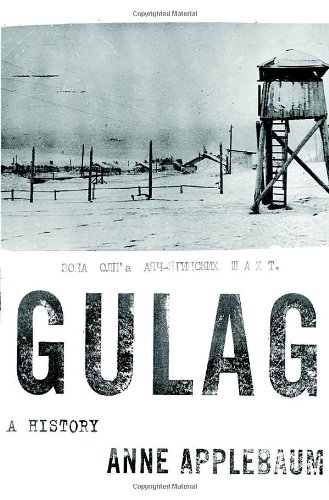 The Gulag—the vast array of Soviet concentration camps—was a system of repression and punishment whose rationalized evil and institutionalized inhumanity were rivaled only by the Holocaust.
The Gulag entered the world’s historical consciousness in 1972, with the publication of Alexander Solzhenitsyn’s epic oral history of the Soviet camps, The Gulag Archipelago. Since the collapse of the Soviet Union, dozens of memoirs and new studies covering aspects of that system have been published in Russia and the West. Using these new resources as well as her own original historical research, Anne Applebaum has now undertaken, for the first time, a fully documented history of the Soviet camp system, from its origins in the Russian Revolution to its collapse in the era of glasnost. It is an epic feat of investigation and moral reckoning that places the Gulag where it belongs: at the center of our understanding of the troubled history of the twentieth century.
Anne Applebaum first lays out the chronological history of the camps and the logic behind their creation, enlargement, and maintenance. The Gulag was first put in place in 1918 after the Russian Revolution. In 1929, Stalin personally decided to expand the camp system, both to use forced labor to accelerate Soviet industrialization and to exploit the natural resources of the country’s barely habitable far northern regions. By the end of the 1930s, labor camps could be found in all twelve of the Soviet Union’s time zones. The system continued to expand throughout the war years, reaching its height only in the early 1950s. From 1929 until the death of Stalin in 1953, some 18 million people passed through this massive system. Of these 18 million, it is estimated that 4.5 million never returned.
But the Gulag was not just an economic institution. It also became, over time, a country within a country, almost a separate civilization, with its own laws, customs, literature, folklore, slang, and morality. Topic by topic, Anne Applebaum also examines how life was lived within this shadow country: how prisoners worked, how they ate, where they lived, how they died, how they survived. She examines their guards and their jailers, the horrors of transportation in empty cattle cars, the strange nature of Soviet arrests and trials, the impact of World War II, the relations between different national and religious groups, and the escapes, as well as the extraordinary rebellions that took place in the 1950s. She concludes by examining the disturbing question why the Gulag has remained relatively obscure, in the historical memory of both the former Soviet Union and the West.
Gulag: A History will immediately be recognized as a landmark work of historical scholarship and an indelible contribution to the complex, ongoing, necessary quest for truth.

"GULAG is a monumental achievement, a masterpiece of Soviet history, indeed, one of the great historical epics of our time. With intense moral clarity, Anne Applebaum exposes not only the full horror of these slave labor camps -- Russia's legacy of state-sponsored genocide -- but the equally shocking, global amnesia towards the millions who died in them."
-Iris Chang, author of The Rape of Nanking: The Forgotten Holocaust of World War II

"Combining meticulous research with myriad accounts of survivors, Gulag: A History illuminates a shadowed world in which millions perished under unspeakable conditions. Any who question why we fought the Cold War will find an answer."
-Henry A. Kissinger, former U.S. Secretary of State


"As the 20th century recedes into history, with all its hideous crimes and high ideals, wars and trials, lies and revelations, we still have an uneasy feeling of some unfulfilled duty left back there, like an unpaid debt or a dead body we did not commit to the ground. This ghost's name is Gulag - and this book, a comprehensive study of a subject most people try to forget, is a first attempt at exorcism."
-Vladimir Bukovsky, former Soviet dissident
“An important and necessary book.”
-Jung Chang, author of Wild Swans: Three Daughters of China


"A monumental work that will long stand as a memorial of the countless victims of the Gulag, and also to the shame of the many erstwhile Gulag deniers."
-Zbigniew Brzezinski, Former National Security Adviser to President Jimmy Carter
“Anne Applebaum’s work is very human, very readable, both rich in detail and highly impressive as an overview of the huge and dreadful GULAG phenomenon. The astonishing story comes alive in a new way, deep feeling combining with deep understanding.”
-Robert Conquest, author of Stalin and The Great Terror
"Anne Applebaum's Gulag is the first up-to-date scholarly study of the central terror institution of the Soviet regime. It is distinguished not only by thorough research in the sources, many of them previously unknown, but by its humane treatment of the victims of this utterly inhuman institution."
-Richard Pipes, Professor of History Emeritus, Harvard University
"Anne Applebaum's Gulag is an important book. Her many years of scrupulous research have provided a wealth of fascinating detail to create a terrifying and unforgettable story."
-Antony Beevor, author of Stalingrad

ANNE APPLEBAUM was born in Washington, D.C., received a bachelor’s degree from Yale, and studied at Saint Antony’s College, Oxford, and the London School of Economics on a Marshall scholarship. In 1988, she moved to Poland to work for the Economist, and a few years later became foreign editor, then deputy editor, of the Spectator. Her work has also appeared in the New York Review of Books, the Wall Street Journal, Slate and other British and American publications. She is the author of one previous book, Between East and West: Across the Borderlands of Europe. After living for more than fifteen years in Europe, she joined the editorial board of the Washington Post in 2002 and now lives in Washington, D.C.