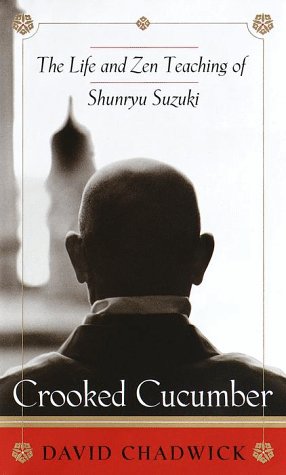 Since the publication of the landmark Zen Mind, Beginner's Mind 25 years ago, the influence of Shunryu Suzuki has grown extensively. His followers have long hungered for a full portrait of the man whose wisdom touched so many, but until now no book has been published by or about this extraordinary individual.

David Chadwick, who studied with Suzuki at the San Francisco Zen Center from 1966 until Suzuki's death in 1971, has interviewed his mentor's family, friends, and disciples and was granted full access to Japanese and American archives. Crooked Cucumber begins with Suzuki's earliest days in Japan, where his teacher nicknamed him "Crooked Cucumber," claiming Suzuki was too absent-minded and dim-witted to ever become a successful priest. Chadwick follows Suzuki through his new life in San Francisco amid the cultural upheaval of the '60s, creating a context for his refreshing and profound teaching. Brief, illuminating chapters, with previously unpublished lecture quotes, convey the down-to-earth message of a man who continues to transform countless lives.

In the literary world, Shunryu Suzuki has always played second fiddle to D.T. Suzuki. With David Chadwick's biography of this extraordinary man, Shunryu Suzuki will take his rightful place as one of the progenitors of American Buddhism. Chadwick, a long-time student of Suzuki's, takes us back to Suzuki's childhood, his entry into monastic life at age 13, subsequent trials with his ornery master and in the notoriously strict Eiheiji Monastery, as well as life as a houseboy with a British tutor to the Chinese emperor, marital tragedies, and the political minefield of World War II while he served as abbot of his own temple. The overarching theme of Suzuki's teaching is practice--in a community setting--and when he takes over a temple of aging Japanese Americans in San Francisco, his practice begins to attract younger Americans. The second half of Crooked Cucumber relates the phenomenal growth of the San Francisco Zen Center and becomes a biography of the growing community and its members, inasmuch as the center was Suzuki's life. A monk who was thought to be as useless as a crooked cucumber, under the pen of Chadwick turns out to be a brilliant, witty, tireless patriarch of American Zen. --Brian Bruya

Shunryu Suzuki is known to countless readers as the author of the modern spiritual classic, Zen Mind, Beginner's Mind. This most influential teacher comes vividly to life in Crooked Cucumber, the first full biography of any Zen master to be published in the West. To make up his intimate and engrossing narrative, David Chadwick draws on Suzuki's own words and the memories of his students, friends, and family.

Interspersed with previously unpublished passages from Suzuki's talks and correspondence, Crooked Cucumber evokes a down-to-earth life of the spirit that goes beyond religion to reveal what it means to be fully human. Retracing this man's journey, readers will find more of the warm-hearted guidance that so many have already found in Zen Mind, Beginner's Mind. Along with Suzuki we can find a way to "practice with mountains, trees, and stones ... and to find ourselves in this big world".

CROOKED CUCUMBER: THE LIFE AND Z