Items related to A Walk in the Woods: Rediscovering America on the Appalachia... 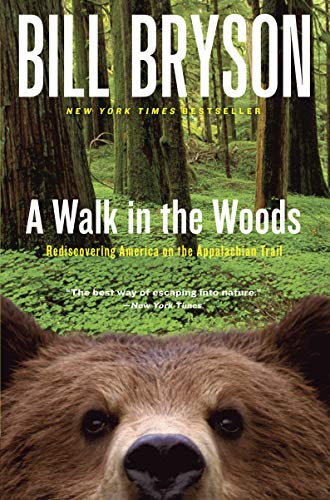 A classic from the New York Times bestselling author of A Short History of Nearly Everything and The Body.

Back in America after twenty years in Britain, Bill Bryson decided to reacquaint himself with his native country by walking the 2,100-mile Appalachian Trail, which stretches from Georgia to Maine. The AT offers an astonishing landscape of silent forests and sparkling lakes—and to a writer with the comic genius of Bill Bryson, it also provides endless opportunities to witness the majestic silliness of his fellow human beings.

For a start there's the gloriously out-of-shape Stephen Katz, a buddy from Iowa along for the walk. Despite Katz's overwhelming desire to find cozy restaurants, he and Bryson eventually settle into their stride, and while on the trail they meet a bizarre assortment of hilarious characters. But A Walk in the Woods is more than just a laugh-out-loud hike. Bryson's acute eye is a wise witness to this beautiful but fragile trail, and as he tells its fascinating history, he makes a moving plea for the conservation of America's last great wilderness. An adventure, a comedy, and a celebration, A Walk in the Woods has become a modern classic of travel literature.

Bill Bryson has made a living out of traveling and then writing about it. In The Lost Continent he re-created the road trips of his childhood; in Neither Here nor There he retraced the route he followed as a young backpacker traversing Europe. When this American transplant to Britain decided to return home, he made a farewell walking tour of the British countryside and produced Notes from a Small Island. Once back on American soil and safely settled in New Hampshire, Bryson once again hears the siren call of the open road--only this time it's a trail. The Appalachian Trail, to be exact. In A Walk in the Woods Bill Bryson tackles what is, for him, an entirely new subject: the American wilderness. Accompanied only by his old college buddy Stephen Katz, Bryson starts out one March morning in north Georgia, intending to walk the entire 2,100 miles to trail's end atop Maine's Mount Katahdin.

If nothing else, A Walk in the Woods is proof positive that the journey is the destination. As Bryson and Katz haul their out-of-shape, middle-aged butts over hill and dale, the reader is treated to both a very funny personal memoir and a delightful chronicle of the trail, the people who created it, and the places it passes through. Whether you plan to make a trip like this one yourself one day or only care to read about it, A Walk in the Woods is a great way to spend an afternoon. --Alix Wilber

Walk in the Woods : Rediscovering America on the Appalachian Trail