Items related to All Elevations Unknown: An Adventure in the Heart of...

Lightner Jr., Sam All Elevations Unknown: An Adventure in the Heart of Borneo

All Elevations Unknown: An Adventure in the Heart of Borneo 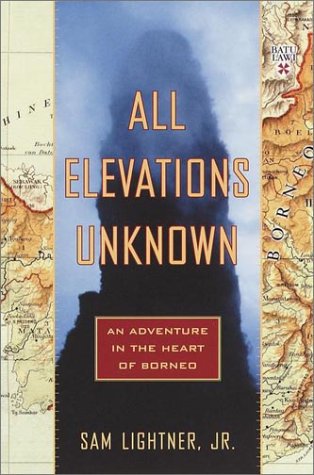 “In 1999, when mankind had successfully mapped the surface of the Moon, Venus, and Mars, there were still sections of Borneo that man had nothing to say about other than ‘all elevations unknown.’”

In the spring of 1999, armed with little more than a description from a book and a map labeled “all elevations unknown,” Sam Lightner and his German rock-climbing buddy, Volker, found themselves deep in the jungles of Borneo on a mission to climb a mountain that was only rumored to exist. They had only their climbing expertise to rely on and a copy of a little-known book titled World Within, written by Major Tom Harrison, a British World War II soldier who had been one of the first white men ever to explore the interior jungles of the island and interact with its native peoples. He had also conducted one of the most daring and unusual campaigns in military history: In 1945, he had been assigned the near-impossible mission of parachuting blindly into the thick Borneo rain forests to unite the feuding native tribes–who then had a grisly habit of cutting off heads–against the Japanese in order to reclaim the island for the Allies.

A captivating, utterly original combination of travel-adventure memoir and historical re-creation, All Elevations Unknown charts Lightner’s exhilarating, often harrowing quest to ascend the mountain Batu Lawi in the face of leeches, vipers, and sweat bees, and to keep his team together in one of the earth’s most treacherous uncharted pockets. Along the way, Lightner reconstructs a fascinating historical narrative that chronicles Tom Harrison’s adventures on Borneo during the war and illuminates an astonishing piece of forgotten World War II history. Rife with suspense and vivid detail, the two intertwining tales open up the island of Borneo, its people, and its history in a powerful, unforgettable way, and take adventure writing to new heights.

A daring twist on the travel-adventure genre that places the talented Lightner in the ranks of authors such as Jon Krakauer, Sebastian Junger, and Redmond O’Hanlon, All Elevations Unknown is ultimately the remarkable story of two adventurers, separated by fifty years and united by one mountain.

In March 1945, a smart but rowdy British officer named Tom Harrisson parachuted into the Borneo Highlands and set about organizing an army of headhunters to battle the Japanese invaders. He knew the difficult country a little, having been there on a scientific expedition before the war, but now, "shepherded to the island by the world's most lucrative sponsor, the Dogs of War," he had to learn its secrets, and quickly.

In 1958, Harrisson wrote a memoir, World Within, chronicling his time on the island. Looking for new places to explore, Wyoming rock-scrambler Sam Lightner and his German climbing partner happened on Harrisson's book, studied it closely, and, with four other "dirt-bag" climbers, went off to Borneo to find the peak of their dreams in the cloud forests, in country that maps "tinted gray and labeled 'All Elevations Unknown'." Battling unusual elements--including having to "cough up the larvae of echinococcosus" and dodge giant snakes, to say nothing of the area's still-active headhunting bands--they found it, scaled the spire called Batu Lawi, and lived to tell the tale.

Their exploits form the heart of Lightner's good-natured narrative, which draws on Harrisson's own account of jungle warfare to become a work of history as much as outdoors travel. Climbers, students of World War II, and armchair adventurers alike will enjoy his report. --Gregory McNamee

“A memorable travel-adventure memoir...Lightner’s natural flair for writing and the inspiration he draws from Harrisson’s life...make this a wonderful introduction to an island and a culture known to few people.” –Publishers Weekly

All Elevations Unknown: An Adventure in the Heart of Borneo

ALL ELEVATIONS UNKNOWN: AN ADVEN