Items related to The Garneau Block 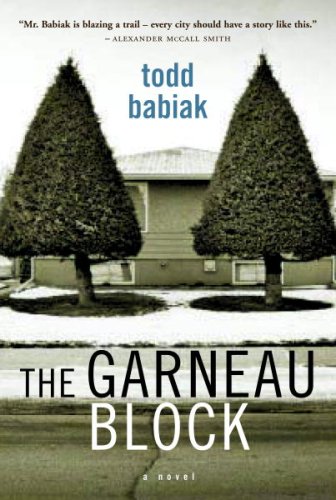 A local phenomenon goes national! This sparkling novel has the warmth and wide appeal of Stuart McLean’s Vinyl Cafe and the wit of Will Ferguson.

What Alexander McCall Smith did with 44 Scotland Street, Todd Babiak does with The Garneau Block. This addictive and charming, laugh-out-loud funny novel enchanted readers when it was serialized in the Edmonton Journal in the fall of 2005 — and now, The Garneau Block makes its national debut.

The Garneau Block follows the knowable citizens of the adored and hated city of Edmonton, capturing what we connect to in local stories and what is universal about modern life. Here, in what can only be described as a storytelling tour-de-force, we meet the warm, endearing, and delightfully flawed residents of a fictional cul-de-sac in the city’s Garneau neighbourhood just after the scandalous death of a neighbour and the sudden news that their land is about to be repossessed by the university.

When mysterious signs begin to appear duct-taped to trees saying only LET’S FIX IT, the block — including a sacked university professor, a once-ambitious, knocked-up haiku expert living in her parents’ basement, an aging actor whose dreams are slipping away, and a quiet but polite stranger — is galvanized to band together in a wild attempt to save their homes. And when regular people put their dreams in motion, anything can happen — namely, political machinations, personal revelations, a public uproar, and unforeseen love.

From a young author whose name will soon be on everyone’s lips come the most lovable Canadian characters since Dave and Morley, and a page-turning-good story. Readers nationwide won’t be able to get enough of The Garneau Block.

For the next while, David talked about the merits of joining the PC party. Why fight it, really? No political organization is perfect, of course, but by giving your support to the Liberals or the New Democrats, what are you doing? Further dooming the City of Edmonton. Further empowering Calgary and the rural caucus.

“Nonsense, David,” said Abby. “That’s the sort of talk that leads to tyranny, and we’ve had plenty enough of it in this province.”

“Tyranny she says! Tyranny!” David took a few steps in Tammy’s direction, so they formed a political triangle. “No wonder the left is so flabby.”
–From The Garneau Block

Todd Babiak is the culture columnist for the Edmonton Journal. His first novel, Choke Hold (Turnstone, 2000), won the Writers Guild of Alberta’s Henry Kreisel Award for Best First Book, and was shortlisted for the Rogers Writers’ Trust Fiction Prize. It was also optioned for film. A native of Leduc, Alberta, Todd Babiak lives in Edmonton.

1. The Coldest Morning in Recent Memory

Madison Weiss woke to the smell of scorched dust and nearly wept. Though she had lived in Edmonton her whole life, and knew well that with September came the first blast of the furnace, Madison felt the city — at least the five houses on her block — deserved a year off. Summer had ended poorly, by anyone’s estimation, and lying in her garage-sale bed, in the suite her father had built in the basement of 12 Garneau, Madison could see no romance in autumn.

The previous night, reading a new collection of nineteenth-century haikus, Madison had forgotten to close her curtain. Now the heatless sun splashed on the upper half of her bed, informing the engines of worry in her brain that a new day had begun. She would have preferred to construct a fort of darkness with her pillows, but she had to be at work in a few hours and the dizziness had arrived.

In the tiny half-bath, as she finished throwing up, Madison remembered:

First autumn morning
The mirror I stare into
Shows my father’s face.

And she threw up some more.

The secret to a comfortable pregnancy and an agreeable post-partum experience is regular exercise. Madison had learned this from Dr. Stevens, a former classmate at Old Scona. Of course, the fact that one of her teenage peers was a doctor, with an Audi and a husband and her own two-storey clinker-brick house overlooking the river valley, was reason enough to search the clinics of Edmonton for an aged gentleman with a British accent, loose jowls, and cold hands. But Madison trusted her doctor, Dr. Stevens, and by way of consolation she did have fat ankles and dry hair.

Madison put on her tights and shiny yellow running jacket. Now that the explosion of hormones in her body had begun its slow work on the size of her behind, Madison appreciated the utility of the rear flap that extended nearly to her knees. She ate a banana in the dimly lit kitchenette and watched a spider stitch its web outside the small window with a view of 10 Garneau’s mustard-coloured vinyl siding. Mid-banana, she wondered about her baby’s father, where he might be at this moment. Trois-Rivières? Prison?

At the door, Madison paused. The furnace had warned her that it would be the coldest morning in recent memory, so she took a moment to prepare herself. Madison closed her eyes and pretended it was February. In February a morning like this would be a miracle.

She stepped out into the September-February morning, breathed in the crisp air and hurried back inside. Television beckoned. Surely there was something on besides bland cartoons and that program where they talk about Jesus and ask for your credit card information.

Soon, Madison would be thirty. She knew, from literature and television shows, that this was no way for a thirty-year-old single mother to behave. So she burst out the door again and down the cobblestone path to the sidewalk. Madison did not linger next to 10 Garneau, with its grey flowerbeds and small jungles of dandelion and chickweed. Potato-chip bags and Styrofoam coffee cups had blown into the yard, and were now trapped under the apple and plum trees Benjamin Perlitz had planted. Benjamin Perlitz, once the most patient and committed gardener in the neighbourhood. A two-week-old strip of yellow police line, coated with dust, hung in the shrubbery. Madison glanced up at the second-floor window, into the darkness and silence of the room where he died, and turned away.

Leaves had already begun to change. Soon the North Saskatchewan River valley would be brilliant orange and yellow, and her morning jog would smell of decomposition and moist soil. The air was clean and the long shadows cast by neighbourhood trees were like old friends.

Madison turned to press against the mountain ash tree in front of her parents’ house for a calf stretch, and discovered a sheet of fresh white paper duct-taped to the bark. Since the night Benjamin Perlitz was shot and his wife and daughter disappeared into the secret grief of the city, Madison and her neighbours had become less likely to be surprised. But this was something. In all her years living under the regulatory shadow of the university, where it was strictly forbidden to affix advertisements, notices, and flyers on historically significant trees and lampposts, she had never seen such mutiny.

Laser-printed in capital letters, in a classic font: LET’S FIX IT.

Underneath, a date and time and the address for a downtown office tower. Madison knew instantly what Let’s Fix It referred to, and understood she was implicated in the “us” of the apostrophe s.

Across the street, the philosophy professor, Raymond Terletsky, ripped a sheet off the tree in front of his house, 11 Garneau.

The professor crossed the street, waving the sheet like a flag. He was dressed unfortunately, in a turquoise sweater that didn’t quite cover the pink of his stomach. He was a tall man, with a slouch. His snug black pants, like all of his pants, displayed too much sock. Madison averted her eyes from Raymond Terletsky’s ensemble and saw that identical sheets of paper were duct-taped to every tree and lamppost on the Garneau Block.

“They weren’t up last night when I came home from work.” Madison turned to study the sheets in silence with the professor.

He stood a little too close for her taste. The professor’s woody-fruity cologne was so powerful it threatened to give her a nosebleed. Raymond Terletsky smiled. “Someone is going to receive one hell of a fine for this.” He turned and raised his voice, though no one seemed to be about. “One hell of a fine.” Birdsong erupted, during which the professor waited for a response. Then he waved the sheet of white paper around with the back of his hand. “What does it mean, do you think?”
Pressing once more against the mountain ash, Madison released her left hand from the bark to point at the second-floor window of 10 Garneau.
“Well, obviously,” said Raymond. “But what does it mean?”