Items related to All About Colour

Lindsay, Janice All About Colour 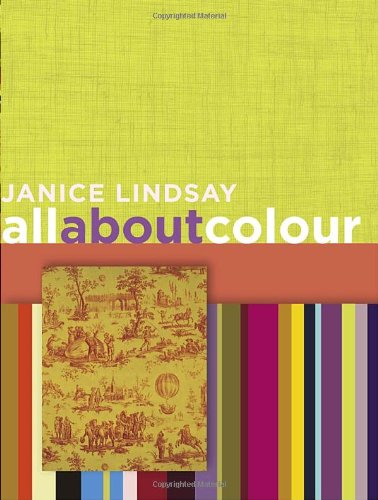 A fascinating and idiosyncratic journey through colour — its history, its meaning, and its effect on everyday life.

Janice Lindsay, an experienced colour designer with a background in art history and design, has always been passionate and curious about colour. In this book she shares a lifetime of discoveries about why colour, something we think will be simple to use and understand, is so complex. She takes us on a journey that combines history, biology, and interior design with personal insights from years of helping others choose colour and get it right. Along the way she recounts how a yellow was once made from cow’s urine and can be used as an intellectual stimulant. How blue used to be considered light black before it gained popularity and became more expensive than gold. And how vermilion red used to look better the longer it was ground — twenty years was just about long enough.

Lindsay explains how the invisible colour in daylight is as essential to our bodies as air and water. Colour is not just decoration, it has the power to change how we feel and function. She tells stories of colour-blind clients, of clients who thought they were happy living without colour until they found out what they were missing, and students whose marks improved once colour was added to the halls. Lindsay explains how we have a colour wisdom that is millions of years in the making based on nature encoded into our DNA and that we need to draw on that wisdom to humanize our built environments. Colour can make a house a home.

This book is about you. You and colour are linked in ways that we haven’t imagined. Beware: after reading this book you will never look at colour the same way again.

Janice Lindsay is Canada’s leading colour designer. Her work has appeared in publications like House and Home and Style at Home and on television’s City Line and HGTV. She writes about colour and design for the Globe and Mail, who have called her their “Design Diva.” She lives in Toronto with her husband, David Macfarlane, and their two children.

Yellow, the Colour of Happiness?

Oscar Wilde walked into Eugene Whistler’s dining room, took in the yellow walls, and exclaimed, “This is the colour of happiness.” Many of the most vibrant people I know live surrounded by seriously bold yellow, the sunshine maker, the energizer, the intellectual stimulant.

Elena, who describes herself as passionate, a risk taker, curious, and engaged with her surroundings, grew up in Venezuela, two degrees of latitude above the equator. When she moved into her home in Toronto, yellow walls were an antidote to the greyness of the north. She tried white but without the strong light of the south it always looked grey. Yellow was not a choice but an imperative. “What I wanted was pure yellow, the real hue and not a shade of it.” That was sixteen years ago. She is about to paint again, and she says she will be using exactly the same yellow. Often yellow is avoided because it is not flattering to the skin. Yellow clothing gives a jaundiced appearance to light or mid­tone skin. Elena’s response to this is “Oh, I couldn’t wear it if my life depended on it! It makes me look like a sick dog.” But nor can she live without it. Over the years its domain has expanded from the living room and dining room to the halls, the kitchen, and more recently her bedroom.
Yellow is more joyful than mysterious. It is the colour of optimism and confidence, warmth and abundance, high self-esteem and an entrepreneurial spirit; the colour of honey, spring flowers and autumn fields and Kodak holiday moments. It is rarely chosen as a favourite colour. Maybe its in­your­face visibility is too pushy for non­extroverts.

Ochre and sienna, abundant earth pigments, were used in cave paintings in Arnhem Land, North Australia, about fifty thousand years ago. In Egyptian hieroglyphs, men’s flesh is painted red but women are distinguished by yellow­coloured skin.

In the Roman Empire, saffron was a colour that only the wealthy could afford to wear. It made a strong and lasting dye but pollen from the stamens of over ten thousand purple crocuses were needed to make one pound. In China, yellow was associated with fire and power and wearing saffron robes was the exclusive right of the emperor. Tibetan monks, conversely, wear yellow robes as a sign of lowliness and humility. However, their robes were dyed with turmeric, a plentiful earth pigment. In India, turmeric yellow is the colour of Krishna and love and fertility, the marriage colour. Vietnamese used turmeric as a bronzing cosmetic to give their skin an amber glow. Turmeric was affordable but faded fast so it made a better dye than a paint pigment. Turmeric­dyed garments could be put through regular colour baths, like a rinse cycle, to replenish the yellow. In India, pomegranate skin made the colour more permanent. Sometimes decorative patterns in turmeric were painted on cloth for a specific occasion and then washed off.

Many of nature’s yellow pigments are highly toxic. Artists found orpiment was hard to use because its gold tones blackened when it came in contact with many other pigments and it had a high arsenic content. Naples yellow, which was used by artists since Greek and Roman times and was the pigment Reubens used to add a healthy glow to flesh tones, became a banned substance in the nineteenth century because it is a toxic mix of lead and antimony oxide. Gamboge, a pigment made from resin that takes a year to ooze out of the tall Garcinia trees of Cambodia, was also a powerful diuretic.

In medieval times, yellow fell from grace in the West. Yellow, the colour of bile, jaundiced skin, and sulphur, was the Devil’s colour. At a time when a colour’s merits were determined by its price, gold held all of yellow’s positive attributes as the colour of the sun, divine light, glory and goodness, and inexpensive earth yellows were considered to be like a dirty or tarnished white. Yellow clothing signified traitors, sinners, and non­Christians. In Christian paintings, Judas, the traitor, was given a yellow robe. In parts of Italy, Jews and Muslims were forced to wear something yellow, a hat or a patch. By the thirteenth century, yellow was also the signature colour imposed on assassins, heretics, and fallen women. Put with green, it was a sign of madness. Its only value was as a dye bath for cloth that had already been dyed blue to turn it green. Yellow with black, one of the most visible combinations, signifies a safety hazard. In nature it warns of the wasp’s sting. The Renaissance restored yellow’s value because in realistic art, yellow painted the look of gold more realistically than gold itself.
Yellow interiors were popular in ancient Greece and the Roman Empire until red took over as the favourite interior colour. Egyptians painted orpiment over burial chambers and sarcophogi because yellow was the colour of divine light. In the eighteen century, it was a fashionable wallpaper colour. By the nineteenth century, neo­classical decorating schemes liked yellow’s way of enhancing the sense of sunlight. And it has been a popular wall colour for the same reason ever since.

The exterior of Van Gogh’s little house in Arles was painted bright yellow.

One side of my main hall is yellow with a touch of green and a bit of dirtiness to it. It is as close as I have come to one I fixated on in a sculpture by Anthony Caro in the retrospective at London’s National Gallery, one that was also used in 1940s advertising signage. I find most people prefer buttery yellows to these slightly bilious hues but to me their slight off­ness gives a magic twist to any palette, that touch of the ugly that makes beautiful things more beautiful.

Yellow walls are not good for everyone. They are a happy thing only if we are happy and can be very irritating if we are not. An art gallery in England that toured schoolchildren from disadvantaged neighbourhoods found that more vandalism occurred in the yellow rooms than in those of any other colour. To those suffering from depression, yellow can seem as unsympathetic and off­putting as someone who stays chipper and cheerful when we are in a bad mood.

Yellow is an intellectual stimulant. It should probably be used more often in boardrooms and classrooms and less often as a bedroom colour for hyperactive children.

Pretty yellow paint chips when expanded to a wall colour let out a surprising volume of energy. The kick is often reduced to tolerable levels when all the furnishings are put back into place and the art is rehung. But it can take time for the eyes to adjust to the intensity of the brightness and the body, to its energy.