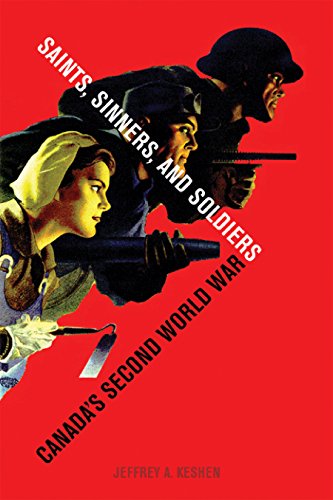 It was the "Good War." Its cause was just; it ended the Depression; and Canada’s contribution was nothing less than stellar. But the dark truth was that not all Canadians were saints or soldiers. Indeed, many were sinners.

The first-ever synthesis of both the patriotic and the problematic in wartime Canada, Saints, Sinners, and Soldiers shows how moral and social changes, and the fears they generated, precipitated numerous, and often contradictory, legacies in law and society. From labor conflicts, to the black market, to prostitution and beyond, Keshen acknowledges the underbelly of Canada’s Second World War, and demonstrates that the "Good War" was a complex tapestry of social forces. Essential to both military and social historians, Saints, Sinners, and Soldiers will also prove fascinating to anyone interested in the evolution of Canada’s social fabric.

Jeffrey Keshen is professor of history at the University of Ottawa.

"Saints, Sinners, and Soldiers is an extraordinary look at how Canadians lived, loved, and worked on the home front during the Second World War. Keshen's massive research into the sources that other historians usually skip over has produced the single best study that we have of rapidly changing social values in a time of great crisis. Absolutely first-rate."―J. L. Granatstein, author of Canada's Army: Waging War and Keeping the Peace

"Keshen's approach is original and he has used an exceptionally wide range of sources including 75 interviews covering Canadians from coast to coast. Opening up a large number of new questions about the 1940s and, by extension, other periods of the twentieth century. Saints, Sinners, and Soldiers will become a standard work in Candian social history."―Terry Copp, author of Fields of Fire: The Canadians in Normandy